Iman Ahad entered service with the US/Philippine Army on December 18th, 1941. He served eventually as Sergeant with the 2nd Replacement Company, 1st Replacement Battalion, Phillipines Army. Later he served with Team II, 125th Infantry Regiment, 10th Military District at Bato-Bato. He was involved in campaigns in Northern Borneo (Sabah), the Sulu Archipelago, the Philippine Islands, Tawi-Tawi and in the Campaign for Leyte. Beofre his retirement on March 15th, 1946, he became 2nd Lieutenant, and served with Company H, 2nd Battalion, 2nd Infantry Regiment at Bongao, the Philippines.

After the Second World War he emigrated to Sabah and took on the Malaysian Nationality.

Received for meritorious achievement in ground operations against the enemy in the Pacific Theatre of Operations, during the Leyte Campaign.

Received for heroism in ground combat on Borneo and Tawi-Tawi, Sulu Archipelago, Philippines.

Awarded for wounds received in action on January 27th, 1945 on the Philippine Islands. 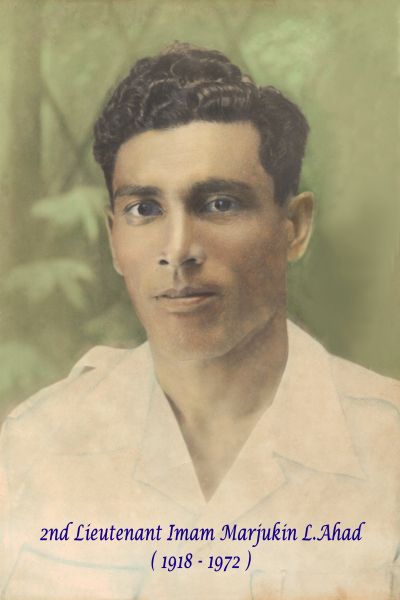