"Near Cisterna di Littoria, Italy, he charged 200 yards over flat, coverless terrain to destroy an enemy machinegun nest during the second day of the offensive which broke through the German cordon of steel around the Anzio beachhead. Fully 30 yards in advance of his squad, he ran into withering enemy machinegun, machine-pistol and rifle fire. Three times he was struck by bullets and knocked to the ground, but each time he struggled to his feet to continue his relentless advance. With one shoulder deeply gashed and his right arm shattered, he continued to rush directly into the enemy fire concentration with his submachinegun wedged under his uninjured arm until within 15 yards of the enemy strong point, where he opened fire at deadly close range, killing 2 Germans and forcing the remaining 10 to surrender. He reorganized his men and, refusing to seek medical attention so badly needed, chose to lead the way toward another strong point 100 yards distant. Utterly disregarding the hail of bullets concentrated upon him, he had stormed ahead nearly three-fourths of the space between strong points when he was instantly killed by hostile enemy fire. Inspired by his example, his squad went on to overwhelm the enemy troops. By his supreme sacrifice, superb fighting courage, and heroic devotion to the attack, Sgt. Antolak was directly responsible for eliminating 20 Germans, capturing an enemy machinegun, and clearing the path for his company to advance." 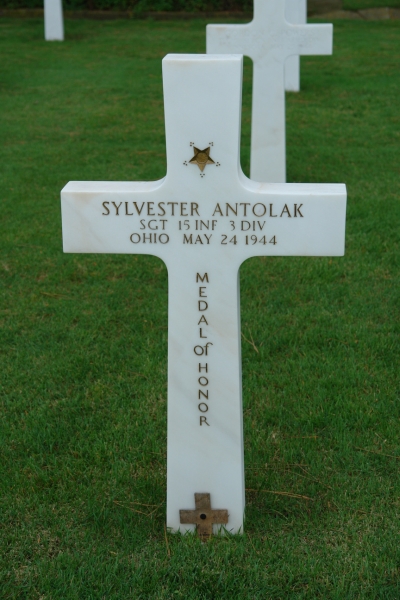 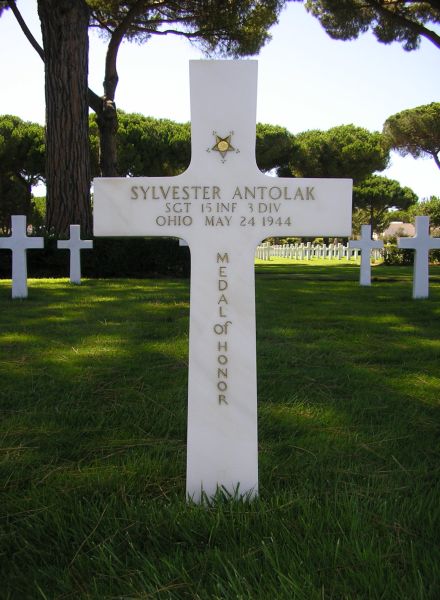