"He fought gallantly on the Villa Verde Trail, Luzon, Philippine Islands. With 2 companions he occupied a position on a ridge outside the perimeter defense established by the 1st Platoon on a high hill. At about 3 a.m., 2 companies of Japanese attacked with rifle and machinegun fire, grenades, TNT charges, and land mines, severely wounding Pfc. Atkins and killing his 2 companions. Despite the intense hostile fire and pain from his deep wound, he held his ground and returned heavy fire. After the attack was repulsed, he remained in his precarious position to repel any subsequent assaults instead of returning to the American lines for medical treatment. An enemy machinegun, set up within 20 yards of his foxhole, vainly attempted to drive him off or silence his gun. The Japanese repeatedly made fierce attacks, but for 4 hours, Pfc. Atkins determinedly remained in his fox hole, bearing the brunt of each assault and maintaining steady and accurate fire until each charge was repulsed. At 7 a.m., 13 enemy dead lay in front of his position; he had fired 400 rounds, all he and his 2 dead companions possessed, and had used 3 rifles until each had jammed too badly for further operation. He withdrew during a lull to secure a rifle and more ammunition, and was persuaded to remain for medical treatment. While waiting, he saw a Japanese within the perimeter and, seizing a nearby rifle, killed him. A few minutes later, while lying on a litter, he discovered an enemy group moving up behind the platoon's lines. Despite his severe wound, he sat up, delivered heavy rifle fire against the group and forced them to withdraw. Pfc. Atkins' superb bravery and his fearless determination to hold his post against the main force of repeated enemy attacks, even though painfully wounded, were major factors in enabling his comrades to maintain their lines against a numerically superior enemy force." 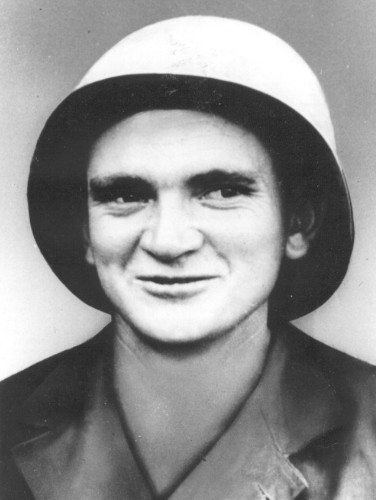