The honorary title "Hero of the Soviet Union' was instituted April 16th, 1934, the accompanying medal August 1st, 1939, by Decree of the Presidium of the Supreme Soviet. Recipients of the medal are automatically awarded the title of: Hero of the Soviet Union.
The title can be awarded to civilians as well as military personnel for having rendered personal or collective acts of heroism that have contributed to the honour or the development of the Soviet Union. Recipients of the title will automatically be awarded the Order of Lenin, moreover they receive a Diploma from the Presidium of the Supreme Soviet. The title can be awarded more than once, however, the Order of Lenin only once. In that case, the recipient will have a sculptural bust in the town of his/her birth. Some 12.600 persons have been awarded the title more than once; August 22nd, 1988, the Supreme Soviet abolished the policy of multiple conferment.
The badge itself takes the form of a five-pointed star made of solid gold. The ribbon is coloured red and approx. 0.75" (19 mm) wide mounted on a hanger that measures 15 x 20 mm. The medal weighs 21.5 grammes. 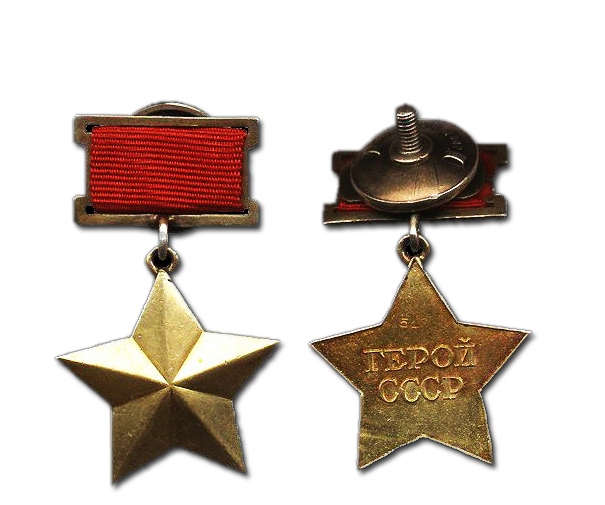