For killing two German soldiers in the outskirts of Sevastopol, despite being wounded, and bringing back intelligence.

During the Battle of Berlin, Aipov replaced a wounded machine gunner on 22 April and suppressed German fire in the suburb of Kaulsdorf. Furthermore, he attacked a basement, killing several German soldiers but was wounded, which prompted him to throw a hand grenade. The explosion mortally wounded him. He died that the same day of his wounds. Aipov had killed a total of 26 German soldiers. 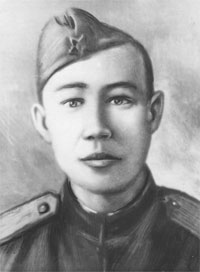