For his able leadership of the troops, personal courage and bravery shown in the fight against the Nazi invaders, a great contribution to training and increasing the combat readiness of the troops in the post-war period.

in connection with the 60th anniversary of the Soviet Army.

Goes with the Gold Star 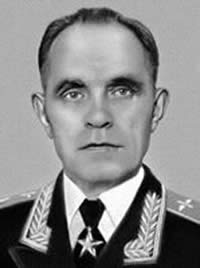