The Order was established September 7th 1928 in recognition of outstanding achievements in production, science, government and public service and can be awarded to both civilian and military personnel. When awarded to collective bodies, the decoration is affixed to its flag or emblem.
The oblong badge consists of a hammer and sickle, surrounded by a wreath. The wreath itself is surrounded by the inscription, in Cyrillic 'Proletarii vsekh stran soedinyaites' (Workers of the world, unite). The top of the wreath is covered by the Red Flag with the initials C.C.C.P. (U.S.S.R.). The ribbon is of blue moiré silk with dark blue stripes at each edge.
A total of 6 types in various versions are in existence. Types 1 and 2 were issued in 1928 and 1936 respectively and have screwbacks instead of a ribbon. Type 3, the 'Long Oval' has two versions; in version 1 the mint mark is on top of the reverse, version 2 shows the mint mark in the center. Type 4 -the 'semi long oval- shows the mint mark in the center of the reverse. Type 5 -short oval- has two version, in version 1 the mint mark occupies two lines in the center, version 2 shows a larger mint mark which is curved and in one line. Both versions of type 6 show a ring on the reverse; in version 1 the serial number was engraved by hand, in the other version it was done mechanically, in some specimens the number is underlined. 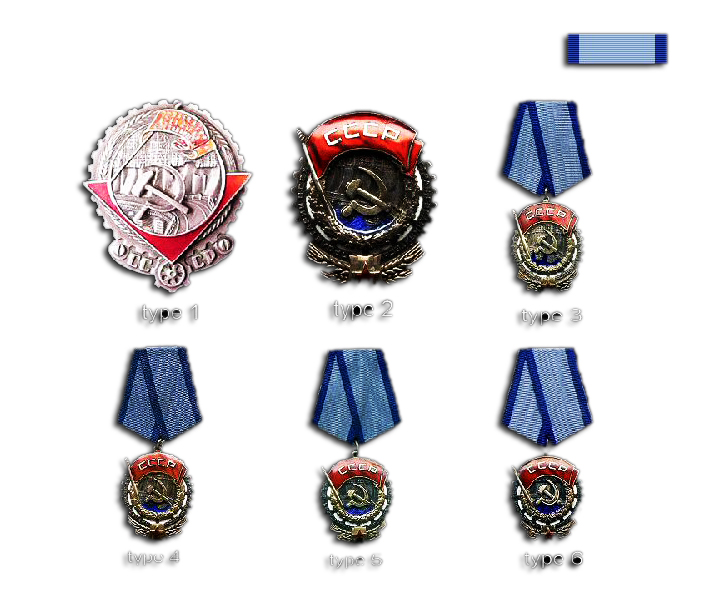