Friedrich Kemnade was born December 12th, 1911 in Schwarmstedt. Having finished his education in March 1931, he joined the Reichsmarine on April 1st 1931 as Seeoffiziersanwärter (candidate naval officer). On October 1st he was commissioned as Seekadett (cadet). After military training he served aboard a sailing training vessel. In 1932 he served aboard the cruiser Karlsruhe and was promoted to Gefreiter (sergeant) on April 1st. In 1933, Kemnade was sent to the Naval Academy in Mürwick and subsequentle served as Divisionsfähnrich aboard the cruiser Königsberg. After being promotd to Fähnrich zur See and to Obermaar he was posted as Divisionsleutnant and 2nd torpedo officer aboard respectively the cruiser Königsberg and Nürnberg. After being promoted to Oberfähnrich zur See and to Leutnant zur See in 1935, he was made Schnellbootkommandant in 1.Schnellboot-Halbflotille in 1936. In 1937, following his promotion to Oberleunant zur See, he was posted to a torpedoschool as an instructor.
At the onset of World War Two in September 1939, Kemnade was commissioned as 1. Torpedo officer and Adjutant on the cruiser Emden where he was promoted to Kapitänleutnant in October. In 1940 he was given command of 3.Schnellbootsflotille; at 22:04 on September 11th, 1940, during a British bombardment on Vlissingen, he was seriously injured whilst aboard Schnellboot S13.
After recuperation, he came back to his old post and was promoted to Korvettenkapitän in 1943. Subsequently he served as Referent in the Oberkommando (Supreme Command) of the Kriegsmarine witihn the SKL (Seekriegsleitung, director naval operations), a post he held until Germany surrendered on May 8th, 1945.
Immediately after he German capitulation, Kemnade was made liaison officer in the OkK (Oberkommando der Kriegsmarine, Supreme Comand Navy) for the Allied Naval Commission and placed under British supervision. On February 27th, 1946, he was released from supervision. Until 1956 he was employed as agent, later as district inspector and management assistent of the Allianz Versicherung-AG (Insurance comp. Ltd) and became branch manager in 1952.
April 1st, 1956 he entered service with the Navy in the newly established Bundeswehr. He received the rank of Fregattenkapitän and he became administrator on the staff of the German Military Mission with NATO in Washington. In 1958 he was promoted to Kommandeur der Schnellboote and in 1960 he took the post of director of operations with the commander of naval forces in the Ostsee. In 1961 Kemnade was made director of operations Flottenkommando and in 1963 he became its Chief of Staff. October 1st of that year, he was appointed Kommandeur der Abteilung Marine Führungsakademie of the Bundeswehr. He remained in this post until April 1st, 1968 when he was appointed Befehlshaber Wehrbereich 1 (Commander Defense Sector 1) and the German Plenipotentiary to AFNORTH (Allied Forces Northern Europe).
Kemnade retired on September 30th, 1970 and on that occassion was awarded the Grosses Verdienstkreuz des Bundesverdienstorden (Grand Cross of Merit) for his contribution to the work of the Bundeswehr.

During his time as a flotilla commander, in the time period 11.09.1940-01.06.1943, he served in the English Channel, eastern Baltic sea and Mediterranean ocean. Throughout this time he participated in 171 sorties. His ships managed to sink, damage or capture a total of 70 warships (2 cruisers, 14 destroyers, 2-3 submarines, several minesweepers and numerous fast attack craft) as well as 12 merchant ships with a total of about 100000 GRT.

Kemnade was badly wounded during a British Air raid dd 11-09-1940 on the Dutch Harbour Vlissingen (Flushing)on board of hte S 13.

A German Schnellbootflottille under the leadership of its commander, Kapitänleutnant Kemnade, participated in the smashing of the British convoy in the eastern Mediterranean. The flotilla torpedoed two British cruisers, of which one cruiser was hit by two torpedoes and likely sunk. Already in its earlier operations along the Libyan coast this flotilla sank a destroyer, a convoy escort, a submarine chaser as well as 15000 GRT worth of supply shipping.

Awarded for the success of his S-Boat flotilla in the Mediterranean (see Wehrmachtbericht extract from 18.06.1942).

The following press article (dated 28.05.1943) describes why Kemnade would receive the Oakleaves

Korvettenkapitän Kemnade, born on the 12.12.1911 in Schwarmstedt (in the Lüneburger Heide) as the son of an imperial official, grew up and graduated in Hanover. He was born in the same year as Günther Prien, and having formed particularly strong ties of camaraderie to him (they were both officer candidates for a year together on the cruiser Königsberg, among other things) he joined the Kriegsmarine in 1931. After the usual training to be a naval officer Friedrich Kemnade came to already be a captain in the first Schnellbootsflottille as a young Leutnant.

Since being appointed commander of the Schnellbootsflottille in the middle of 1940, a post which he has held to this day, Kemnade has participated in over 150 sorties and led his ships with distinction and great dedication. The flotilla was first deployed in the west against England, the east against the Soviets, shortly afterwards once again in the English Channel and finally in the entire Mediterranean area of operations. After the Anglo-American landing in North Africa Kemnades Schnellbootflottille, in conjunction with the Luftwaffe, had the mission of supporting the formation of a bridgehead in Tunisia as the first German/Italian naval unit to be so assigned to this task. In the harbours of Tunis and Bizerta he was the first to raise the German flag. His presence ensured that it was possible to land the incoming German and Italian troops and secure the supply of material.

Additionally the losses inflicted by this flotilla, to which the Kapitänleutnant Wuppermann (recently awarded the Oakleaves by the Führer) also belongs, are especially great. They include both the destruction of almost 100000 GRT worth of enemy merchant shipping as well as the torpedoing and sinking of numerous warships, especially destroyers. Korvettenkapitän Friedrich Kemnade has proven himself as an exemplary and skillful commander in all of these operations.

The Führer awarded him the Knights Cross to the Iron Cross on the 23.07.1942, the Italian king and dictator have twice given him the Silver Bravery Medal. Korvettenkapitän Kemnade is also a holder of the German Cross in Gold and the Wound Badge.

During his time as a flotilla commander, in the time period 11.09.1940-01.06.1943, he served in the English Channel, eastern Baltic sea and Mediterranean ocean. Throughout this time he participated in 171 sorties. His ships managed to sink, damage or capture a total of 70 warships (2 cruisers, 14 destroyers, 2-3 submarines, several minesweepers and numerous fast attack craft) as well as 12 merchant ships with a total of about 100000 GRT. 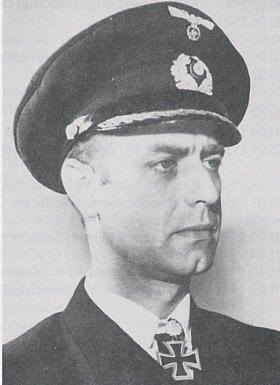