Date according to the Ehrenpokal.

Awarded for his achievements as a bomber pilot. He particularly distinguished himself during the following operations

- Attacks against Polish troop concentrations in the Kutno pocket.
- The attack against the Fortress Dröbak (during the Norwegian campaign.
- Reconnaissance and anti-submarine sorties in the Skagerrak-Kattegat area.
- Raids against British landing positions at Namsos and Andalsnes.
- Attacks against the Dutch airfields at Amsterdam-Schiphol and Bergen op Zoom.
- Mining operations against the mouth of the Thames.

Awarded for the following achievements

- Scoring a direct hit on the ammunition freighter Clan Fraser in the harbour of Malta (06./07.04.1941). The resulting explosion destroyed a total of 11 ships with 41942 GRT.
- Developing the Wilde Sau single-engined night-fighter tactics.
- Achieving 6 aerial victories of his own.

Awarded for achieving a grand total of 9 aerial victories against four-engined bombers as well as his development of innovative fighter tactics. 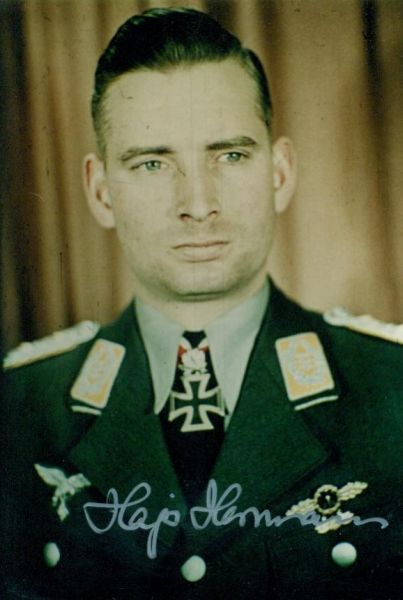