Martin Harlinghausen flew approximately 175 operational sorties, most of the in the Heinkel He 111. In this time he was credited with sinking 26 merchant vessels (with 127000 GRT).

1. April 1923 : promoted Seekadett
1927 : promoted Leutnant z.S.
1. October 1933 : pilot training
1. October 1934 : promoted Hauptmann and posted in the Reichsluftfahrt-Ministerium
December 1937 : Kommandeur of the AS 88 - Legion Kondor in Mallorca
1. August 1938 : promoted Major
December 1938 - March 1939 : Training as general staff officer in the Luftkriegsschule in Gatow
1939 : Ia officer in the Luftflottekommando 2 in Braunschweig
September 1939 : Chef des Generalstabes des X. Fliegerkorps
14. April 1940 : Fliegerführer in Stavanger
He sank himself 20 steamers (100.000 GRT) and received for that his RK on 4. Mai 1940 (1st Kampfflieger to earn the distinction).
1. January 1941 : promoted Oberstleutnant i.G.
Harlinghausen developed ship-attack tactics that the Luftwaffe used over Great Britain in 1940. The number of ships attacked and damaged in 1940 rose to 127 and to a peak of 164 in 1941.
Sent to Italy in December 1940, he sank another 27,000 GRT of shipping and was awarded the Oak Leaves (Eichenlaub) 30 January 1941.
On 28 February 1941 he was appointed Fliegerführer Atlantik, a post he held until July 1942.
He became recognised as the Luftwaffes leading anti-shipping specialist. Harlinghausen barely had 100 aircraft available to him owing to Hermann Görings intransigence. Among his duties was to coordinate attacks on convoys with the Kriegsmarines U-Boats. Harlinghausens command was effective, and often transmitted accurate locations of convoys but because of a paucity in submarines, they failed to respond. Harlinghausen remonstrated with Karl Dönitz who decided a more flexible approach was needed, rather than close cooperation. Harlinghausen frequently clashed with the Admiral over operational deployments, and opposed the shifting of air operations to interdict Gibraltar sea lanes as opposed to the Western Approaches. During his time as Fliegerführer Atlantik, Harlinghausen was held responsible for the Luftwaffes failure to prevent the loss of the battleship Bismarck.
Harlinghausen was appointed Fliegerführer Tunesien in July 1942. He remained in the Mediterranean theater until 18 June 1943, when disagreements with his superiors led to his replacement.
In December 1944 Harlinghausen was appointed Chef des Luftwaffenkommandos "West", a position he held until the cessation of hostilities. He was captured by American troops and was released in 1947.

Awarded for his achievements as a Luftwaffe staff officer and as a bomber pilot against shipping.

Awarded for his outstanding performance as an anti-shipping pilot. He had developed a tactic to sink ships by scoring hits on their broadsides (subsequently dubbed the turnip method), and in using this tactic was able to destroy a remarkable number of ships given the limited number of sorties he flew. He was recommended for the Oakleaves on account of his sinking a total of 20 merchant ships, altogether comprising over 100000 GRT. 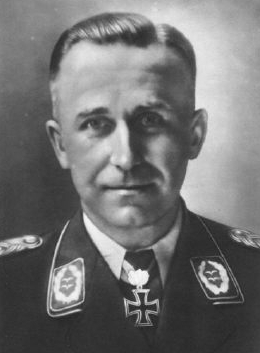