Hans Krebs was born on March 4th 1898 in Helmstedt. Hans was the eldest of the two children of head teacher Otto Krebs and his wife Adele. When the First World War started, he volunteered as a 16 year old and took part in the Battle of Verdun. After the First World War he was incorporated in the new Reichswehr. He married Ilse Wittop on April 29th 1920. He has been described as a person with a convinced National Socialist believe. He was promoted in 1939 and transferred as a Oberst to the Oberkommando des Heeres and shortly after that appointed to Chief of General Staf of the 7.Armeekorps. In 1940 he became a Colonel and was appointed to Chief of Staff of the Armeegruppe Mitte in 1943 with the rank of Leutnant-General. He took part in the spring operations on the Eastern Front in 1943. On March 19th 19451940, Hans Krebs was appointed Chief of Staff with the Oberkommando der Wehrmacht and with that the successor of Heinz Guderian who was replaced by Hitler. With this he became the last Chief of Staff with the German Army before the capitulation. Krebs signed together with Goebbels, Wilhelm Burgdorf and Martin Bormann, Hitlers last will and testament. When Adolf Hitler committed suicide op April 30th 1945, Krebs was appointed by Goebbels toe negotiate for peace with the Soviets. The negotiations went very well because Krebs spoke Russian what he had learned during his stay in Moscow. On May 1st 1945 he went to General Tjoekow of the 4th Russian Guards. Krebs handed him Hitlers political will together with the list of the cabinet of the new German Government. First there had to be negotiated a seace fire. This was refused by Stalin, Stalin wished an unconditional surrender of Germany. Krebs then returned to the Fuhrerbunker where Bormann accused him of being a bad negotiator. When in the afternoon on May 1st 1945 almost all important persons had fled the bunker, Krebs and Hitlers Adjudant Wilhelm Burgdorf committed suicide in the Führerbunker round 21.30 hours.

Awarded for his role in the largely successful fighting of Heeresgruppe Mitte after Operation Barbarossa ended. He was the army groups chief of staff in the period 14.01.1942-01.03.1943 and gave much useful assistance to its commanders during this time.

Awarded for his achievements as the chief of staff of Heeresgruppe B during the defensive battles near Aachen and the offensive operations in the Ardennes and Eifel regions. His superiors deemed his best qualities as being clear judgement, quick perception, flexibility and drive. 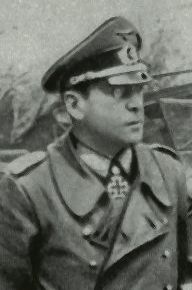