Herinich Hax served after the Second World War from 1956 until March 31st, 1961 with the Bundeswehr. Here he finally reached the rank of Generalmajor.

Generalmajor Hax has proven himself in numerous operations as the commander of the 8. Panzer-Division by his outstanding bravery and extremely successful leadership, and was awarded the Knights Cross to the Iron Cross on the 07.03.1945 in recognition of this fact. In the fighting since then he has once again distinguished himself in his conducted operations as a notably brave and inspiring leader:

1.) After two hours of preparatory artillery fire by artillery, Pak, mortars and rocket launchers, the enemy commenced a major attack on the Leobschütz sector at 07:00 on the 22.03.1945. It was launched against a narrow front with at least 3 rifle divisions and the bulk of 2 mechanized units, and supported by strong tank forces and omnipresent ground attack aircraft units. It rolled over our bravely defending troops up to the southern edge of HohndorfKolonie Bladen. This immediately created the threat of an enemy breakthrough towards Troppau with tank and infantry forces.

Generalmajor Hax immediately commenced an energetic attack against Hohndorf with the first arriving elements of his 8. Panzer-Division. Through a bold encirclement maneuver he managed penetrate into northwestern part of the village and then hold the place in an extremely difficult urban battle, which saw numerous enemy tanks destroyed.

Through this decisively led thrust (conducted with exemplary bravery) into the centre of the enemy mass, which brought extraordinarily heavy losses to the enemy, Generalmajor Hax significantly contributed to the breaking of the enemy assaults ability to force a breakthrough. This in turn prevented a breakthrough into the important Troppau region.

2.) The enemy launched an extremely heavy series of attacks against the frontline held by the 97. Jäger-Division and the 1. Ski-Jäger-Division (which ran through Kranstädt and Rösnitz) on the 02.04.1945. Simultaneously they applied heavy pressure to the flanks of the entire defending German Korps in order to bring about a collapse of its frontline through a concentrated attack, which would open the way into the Bohemian-Moravian industrial area. On the right Korps flank they succeeded in crossing the Oder river at Fischdörfel and advancing up to Kreuzenort. Attacks of the nearby 17. Panzer-Division with the subordinated 371. Infanterie-Division failed to make a good impression on the enemy despite the immense sacrifices made. This meant that the ongoing reinforcement of the enemy forces in the bridgehead was able to continue, which created the danger that the front of the 97. Jäger-Division & 1. Ski-Jäger-Division would eventually be rolled up.

On the 06.04.1945 elements of the 8. Panzer-Division began its own attack to crush the bridgehead at 19:30. In a bold forward onslaught they managed to break the tough enemy resistance, capture Fischdörfel and reach the Oder river. In the end they succeeded in clearing the area of the bitterly defending enemy in harsh combat that was partially fought in urban areas, all while inflicting heavy losses on the foe. With this the major threat to the right flank of the Korps was removed.

Both of these decisive successes by the 8. Panzer-Division were in large part due to the exemplary command abilities of Generalmajor Hax. In the critical situations which he found himself in he always managed to redirect his forces with exceeding swiftness and skill. Personally leading from the front, he ensured that his men were able to give the best that they had and thus bring about success in battle.

3.) On the 15.04.1945, in the Brünn area, the Soviets launched an attack that included about 40-50 tanks along the TscheitschAusterlitz road, and threatened to break through the front of the Korps. Through a swift intervention by Generalmajor Hax and his 8. Panzer-Division, this attack was crushed. Attacking from the march against the forward Soviet units, he destroyed a number of tanks and threw the enemy back to their starting position.

This looming breakthrough was only stopped on account of the bold intervention and inspirational attacking spirit of Generalmajor Hax. He decisively contributed to this defensive victory through his fearlessness and courage.

4.) On the 21.04.1945, once again in the Brünn area, Generalmajor Hax launched a bold thrust against Unter-Kanitz from the Großschaft area, which saw him lead his divisions armoured group against tough enemy resistance. This outstandingly conducted operation was a full success thanks to the flexible leadership and ruthless devotion to duty of Generalmajor Hax himself. Strong elements of two cavalry divisions and two tank brigades were cut off from their rearward connections by this move.

Through his actions here Generalmajor Hax created the groundwork for the annihilation of these encircled elements, while also eliminating the impending enemy breakthrough towards Brünn.

The 843rd Awarding was the last numbered awarding. After this the awardings are uncertain or not numbered. When the numbering is being continued at the hand of the awarding dates, Heinrich Hax's awarding would have been the 855th Award. 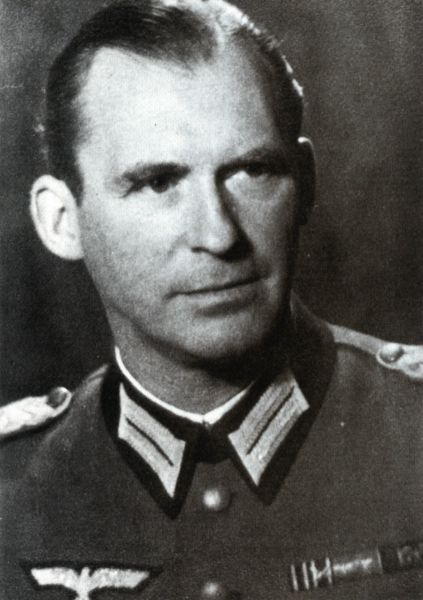