Major König distinguished himself as the commander of the II./Infanterie-Regiment 352 on the 06.02.1942 during the storming of Turowo (5 km southwest of Belyj) and the attack on Wlasnewo-Chirewo (02.05.1942). Later, as a regimental commander, he then further distinguished himself during the attack on Ssuchowo, the continuation of the attack on Shury and the storming of the Hill 228.4 (500 metres west of Gridina). His independent decision to attack and capture Hill 228.4 in particular (which was 4 km northeast of Belyj) was decisive for the elimination of the Soviet pocket further south as it enabled a linkup with the 1. Panzer-Division, which was attacking towards the north.

For his conduct during these battles König would receive the Knights Cross.

The Oakleaves for Oberst König:

On the 04.11.1943 the Führer awarded the Oakleaves to the Knights Cross of the Iron Cross to Oberst Eugen König, commander of a Grenadier-Regiment. He is the 318th soldier of the German Wehrmacht to be so honoured. He had previously been awarded the Knights Cross for his actions southwest of Rzhev in July 1942, where strong Soviet forces were deployed for battle and destroyed. Here he conducted 2 opposed river crossings, stormed several hills and held them against fierce, overwhelming counterattacks until reinforcements arrived.

During the summer and autumn battles in 1943 he led a Grenadier-Regiment belonging to the Hessian-Thüringian 251. Infanterie-Division (which was named in the Wehrmachtbericht of the 29.10.1943). During the last days of August this Regiment was involved in the major defensive combat southwest of Orel. Here all enemy attempts at penetration were smashed by the Division in the bitter combat. However the Soviets eventually succeeded in achieving a deep penetration in the sector of the left neighbouring Division. Although his own Regiment was itself engaged in heavy defensive combat, Oberst König set out against this new threat with his reserves and a few subordinated Sturmgeschütze. With these forces he launched an immediate counterattack and smashed the broken-in enemy forces with his handful of Grenadiers following a bloody engagement. 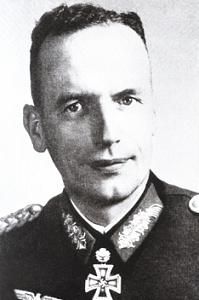