This decoration was instituted on December 20th 1939 by the Oberstbefehlshaber des Heeres, Generalfeldmarschall von Brauchitsch. It could be awarded to members of non-motorised Infantry units and units of the Gebirgsjäger that had participated in Infantry assaults, with light Infantry weapons, on at least three days of Battle in the frontline as from January 1st 1940. When a counter offensive led to fightings at short distance, they could also apply. Award of the Infanterie Sturmabzeichen was authorised at regimental command level or above. The first two Awards were given to an officer and a enlisted soldier on a special occasion on May 28th 1940, by von Brauchitsch himself.

The design came from the firm C.E. Juncker in Berlin and consisted of an oval wreath of Oak leaves with the "Wehrmacht-eagle" with folded wings and the Swastika in its paws, at the top. From the upper left to right downwards there can be found a rendition of the Mauser K98k, the German standard Infantry weapon. The normal measures are 6.3 cm in height and 4.9 cm wide. At first they were made from messing (Buntmetall), but later they were produced from Tin (Feinzink). The finish was silver and had a vertical pin on the back. The badge was produced in very many quantities and by many firms. This resulted in badges with and without markings, hollow or flat and with many different pins on the back.

On June 1st, 1940 the rulings were adjusted and a new bronze version was instituted. The silver Infanterie-Sturmabzeichen was meant for soldiers as when the first version was introduced, together with heavy units of Infanterie- and Gebirgsjäger Regiments (Machinegun, Infantry Artillery and Anti-tank guns).

With the institution of the "Ordens-Gesetz" of 1957, it was German military permitted to wear de-nazified versions of German decorations. Also the Infanterie- Sturmabzeichen was produced from 1957 as a de-nazified version, without the eagle and the Swastika. 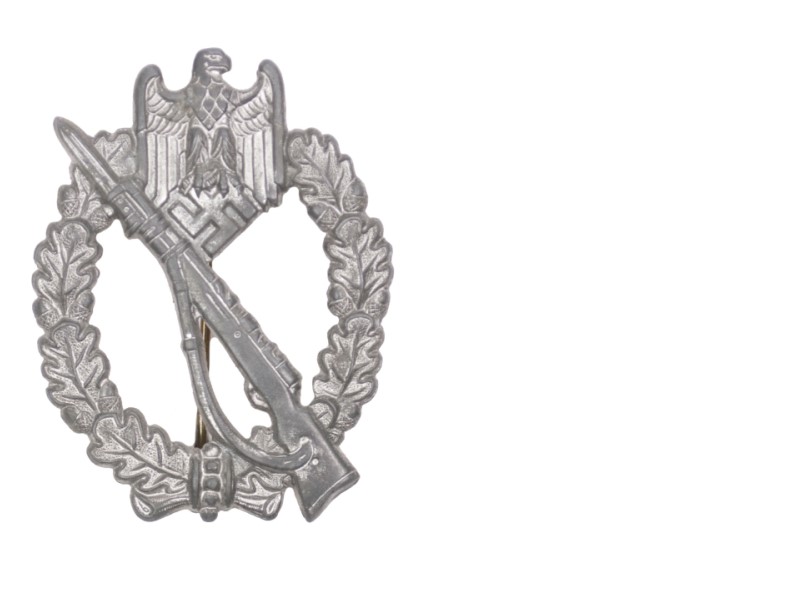