The Close Combat Bar was initially made out of tomback an later also from zinc. After the badge was stamped out, it was gold plated. Most of these bars are zinc examples. These zinc examples are less of quality and nowadays have lost most of there finish. This award is long shaped with a length of a 9,7cm and a height of 2,6cm. The badge is slightly concave so it fits better to the chest of the recipient. The centre motive is made of a square with at the top a typical spread-winged Wehrmacht eagle and this eagle is clutching a swastika in its claws. Underneath this swastika are a crossed stick grenade and bayonet placed. The other three borders of the square consist of each two oak leaves. From either side of this central motive, emerges a single oak leaf with at the upper and lower corner an acorn. From underneath the tip of this single oak leaf, a spray of three other oak leaves emerges. Between the centre motive and the outer oak leaves are two striped areas, which you could see as sunburst rays. At the reverse is a long horizontally lying needle with a standard hook construction mounted. In the centre is a small black finished backing plate crimped into position. This was done to highlight the centre motive at the obverse. At the reverse is also usually the name or logo from the manufacturer stamped.

The golden grade (III Stufe) was awarded for 50 days close combat. These 50 days could be shortened to 40 days by the division commandant, when the recipient was to severely wounded to for fill the prescribed 50 days. When the recipient was awarded with the golden grade, he was normally also awarded with the German Cross in Gold (Deutches Kreuz ins Gold) , if this award was not already possessed by the recipient. This golden grade is probably 635 times awarded. Among these 635 recipients, there were only 7 Luftwaffe soldiers. The golden grade was awarded during official ceremonies by Hitler himself, or by Heinrich Himmler in name of Hitler. When Himmler was not able to present them, then Generaloberst Guderian awarded them. 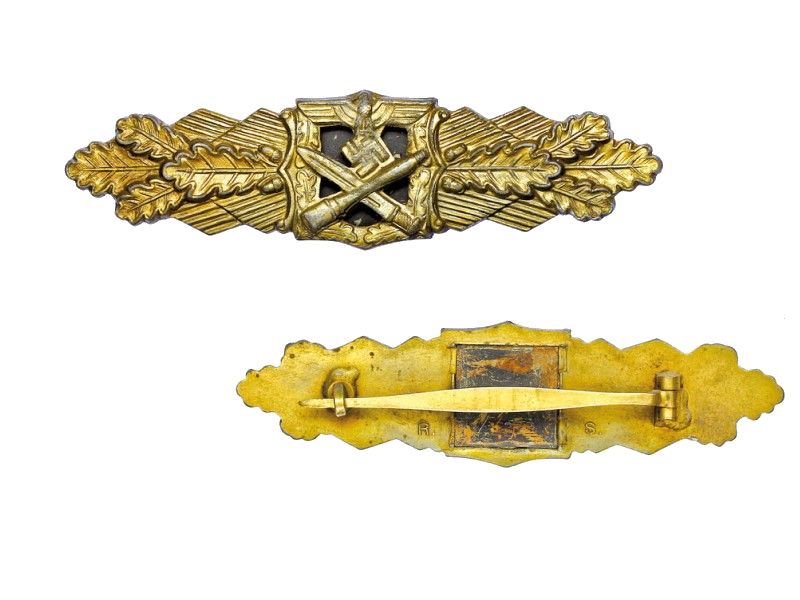