"On the 14.09.1943 the Kradschützen Kompanie of the 1. SS-Inf.-Brigade (mot), under the leadership of SS-Obersturmführer Sonne, were subordinated to the 18. Panzer Division and assigned to protect their left flank, north of Duchowtschina. In accordance with their orders, they took up defensive position northwest of Podsselje and made contact with the 18. Panzer Division.

Through constant reconnaissance attacks, Sonne himself gained an exact picture of the overall situation, as well as obtaining detailed knowledge of the Soviets. This made it possible, later on, to take the situation firmly into our hands. In the early morning hours of 15.09.1943 the enemy attacked several times, with strong support, along the main road. These were pushed back again and again, however, owing to the prudent and exemplary leadership of Obersturmführer Sonne (even though the enemy attacks had tank support). The defense was made possible with the support of Sturmgeschütze, which had to operate in this most difficult terrain, which at times held them back and in turn allowed the enemy to partially break-in. In these especially threatening situations, Sonne with his Kompanie Trupp would intervene decisively.

In the meantime, the enemy attacked towards the west, along the main road to Maloje-Klisslokvo. A Company of the enemy had gone around and the situation became critical. Sonne, however, decided to occupy and hold Hill 247.2 and from here was able to inflict the heaviest of losses on the enemy with well-placed flanking fire.

There, Sonne completely realigned the connection to the Sturmgeschutze-Batterie and placed three Sturmgeschütze nearby. Sonne helped to direct the fire of the Sturmgeschütze, despite the heaviest enemy fire. The hostile attack continued, with their own well-placed fire. Nevertheless, they left behind 6 light MGs, 1 heavy MG and 1 medium mortar.

After the Kradschützen-Kompanie were ordered back to a new line, Sonne could restore the connection to the 18. Panzer Division. In the meantime, the enemy once again pushed forward in strength, searching at any price for a weak position in this new line. Here, Obersturmführer Sonne took his Kompanie (which had already lost two-thirds of their combat strength) and from his own resolution, recognizing the threatening danger, pushed forwards into the flank of the enemy mass. They stuck close to the enemy to keep losses low, which caused them full confusion and forced them to adjust their attack thereafter.

Through this determination and extremely skillful push, the Kradschützen-Kompanie resisted the advance of the enemy for around 12 full hours. They intended to advance down the main road from Duchowtschina and commence the destruction of the 18. Panzer Division. This was defeated due to the unshakeable courage and the exemplary sense of duty of Obersturmführer Sonne. The personal readiness and heroic actions, as well as the perfect attitude of Obersturmführer Sonne were fully recognized and worthy of the Commander of the 18. Panzer Division to personally write to me about. A copy of this letter is attached.

SS-Obersturmführer Sonne has until now not been given the Honour Roll Clasp of the German Army. The recommendation for the award of the German Cross in Gold and the Knight's Cross have not been submitted up until now." 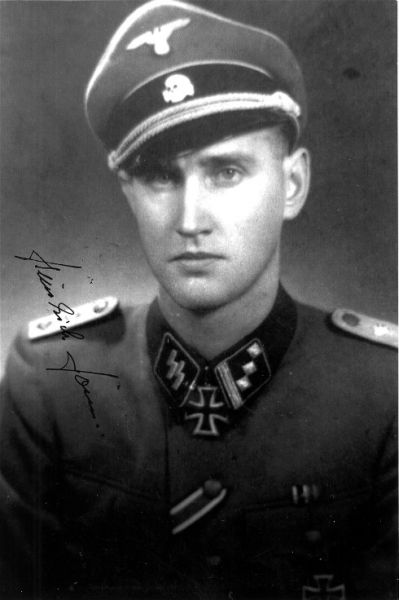