On the 03.10.1941 Oberst Hauser led his Regiment across the heavily defended Dnieper river, capturing the bridge at Gluschkowa through a swift action shortly before it was due to be blown up. On the 05.10.1941 Hauser and his Regiment captured the village of Kamenez, which would serve as the springboard for the decisive continued advance. This success was made possible through the personal initiative of Hauser in the hard urban combat. On the following day the Regiment stormed past the Vyazma position under Hausers brilliant leadership, and on the same day reached the highway near Vyazma itself. Here a swift foothold was secured, which in turn guaranteed the fall of the city. The tenacious energy of the daring regimental commander is largely responsible for the Division being able to complete its assigned tasks so successfully during the encirclement battle here.

The following press article describes why Hauser would receive the Oakleaves

Oberst, and later Generalmajor, Eduard Hauser has led the 13. Panzer-Division through its battles near Melitopol, on the Nogay Steppe, northeast of Krivoi Rog and southeast of Kirovograd. His Division was named in the Wehrmachtbericht two times, on the 12.10.1943 and the 24.12.1943. During the time period 10.10.-22.12.1943 alone he led his Panzer-Division through nine successful counterattacks (most lasting multiple days), in which the Division inflicted heavy losses on the enemy in terms of both men and materiel every time. The Division achieved a particularly noteworthy success in the fighting south of Kirovograd during the time period 18.-22.12.1943. 16 Soviet AFVs, 52 artillery pieces of all kinds and 30 trucks were destroyed or captured and 350 prisoners brought in. In all this time Generalmajor Hauser led his Division from the foremost line. On multiple occasions he was able to get stalled attacks going again through his personal example. During the last counterattack southeast of Kirovograd Generalmajor Hauser became a casualty, and therefore had to be evacuated to hospital. 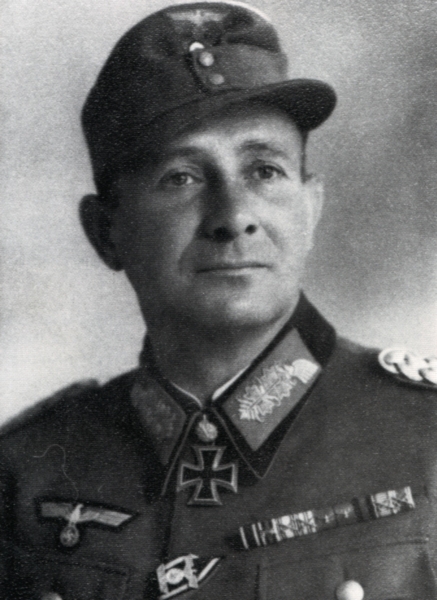