Having reached the stone slopes that led from El Alamein to Qatarra, on the 01.07.1942 the Division received the mission of cutting off strong enemy forces located in the El Alamein position (specifically at Quaret el Abd and further south of there) through a thrust of its own towards Alam Nayil.

The Division thrusted past the identified enemy forces located near Deir el Shein. As Oberst Ewert was marching towards the area northeast of Deir el Shein with the spearhead of his Regiment, he received continuous bombardment from the east and southwest. He realized that the well-constructed and heavily-manned enemy strongpoint at Deir el Shein was far larger and extended farther to the east than had been previously supposed.

Immediately recognizing that the completion of the Divisions mission through a further swing to the east was not possible because of an extended fieldwork that flanked the advance, Oberst Ewert decided to suspend the march and capture the strongpoint of Deir el Shein through a surprise attack. This bold decision led to a total success for the Division. Personally led by Oberst Ewert, the foremost elements of the Regiment swiftly entered into the enemys fieldwork (which was protected by mines and barbed wire) despite the strong hostile resistance. Over the course of the day this was captured in close combat. About 1500 prisoners, 25 artillery pieces, 15 anti-tank guns, 2 self-propelled guns, 57 vehicles as well as numerous anti-tank rifles, MGs and mortars were captured. With this the first redoubt of the Alamein position fell into German hands.

Over the course of previous operations Oberst Ewert has shown himself to be a very brave and prudent leader of his Regiment. His personal and bold actions led to noteworthy successes by his Regiment during the thrust towards the sea west of Acroma, the storming of Tobruk and the defensive battles near Sidi Muftah. 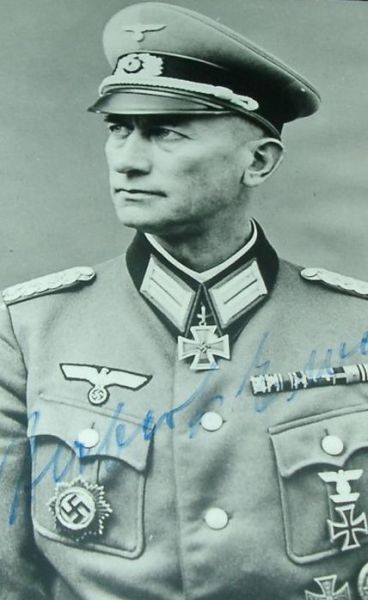