Andrew William "Nicky" Barr was recognized for shooting down 12 enemy planes, all achieved in a Curtiss P-40 fighter. Three of them in a P-40D Tomahawk and 9 in a P-40E Kittyhawk.

He received the Officer Order of the British Empire (OBE) in 1983.

Citation:
"This officer, who commenced operational flying in November, 1941, has displayed the greatest keenness and skill as a fighter pilot. In December, 1941, during a patrol over the Derna area, he shot down a Messerschmitt no 110; the next day, in the same area, he destroyed a Messerschmitt no 109 and a Junkers 88. One day in January, 1942, his squadron formed part of an escort to bomber aircraft operating over El Agheila. Enemy aircraft were encountered and, in the ensuing engagement, Flying Officer Barr attacked 2 Italian fighters, one of which he shot down. He then observed one of his fellow pilots, who had been shot down, waving to him from the ground but, when preparing to make a landing in an attempt to rescue him, Flying Officer Barr was attacked by 2 Messe.rschmitt 109's. Although the undercarriage of his aircraft was not fully retracted, he immediately manoeuvred to engage the attackers, only to find that his guns had jammed. Quickly rectifying the fault he delivered an accurate burst of fire which caused one of the Messerschmitts to disintegrate in the air. A further 2 enemy aircraft joined in the combat and Flying Officer Barr was wounded and forced down. While on the ground he was further wounded by the enemy's fire but, despite this, he made his way through the enemy's lines and rejoined our own forces some 3 days later. He brought back much valuable information regarding the disposition of enemy tanks and defences. Flying Officer Barr displayed the greatest courage and tenacity throughout. He has destroyed 8 enemy aircraft."

Received for gallantry and devotion to duty in the execution of air operations.
Destroying further enemy aircraft. 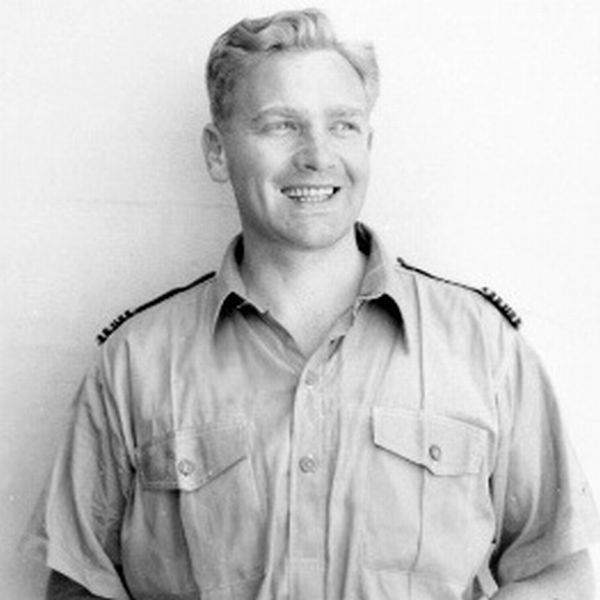