On the 25.07.1943, during the fighting around Milejewo (northeast of Briansk), the I./Grenadier-Regiment 279 attacked the Soviet forces at Panoff. The 3. Kompanie however came under heavy artillery fire just before reaching a forest, and the attack stalled. After the Kompanie commander and two Zug commanders had fallen out, Schmitz took command of the remaining forces (which were by now starting to flee) and pushed forward into the enemy positions in the woods, breaking into them. However they were too strong to completely overcome, and the Kompnanie withdrew back to the western edge of the forest.

Here it was possible to see how the Soviets had meanwhile bypassed and encircled the rest of the Bataillons elements that were before Panoff itself. These forces were just starting their own attack to annihilate the other elements of the Bataillon. Despite having only 33 men under his command, Schmitz made the independent decision to attack these Soviet forces in the rear and open a path for his Bataillon to escape. In a hard battle he was able to open a gap in the surprised Soviet forces, and his comrades were able to escape certain destruction.

Three days later Schmitz was badly wounded while trying to rescue another wounded comrade, and was evacuated to the hospital. Here he was awarded the Knights Cross. The reason for this was for Schmitzs actions as described above, as well as his outstanding performance as a medic up until this date. On one occasion he alone was able to rescue 98 wounded German soldiers in a space of just 14 hours, dragging each one back to friendly lines while being under enemy fire.

He would be one of the only medics in the war to receive this particular award. 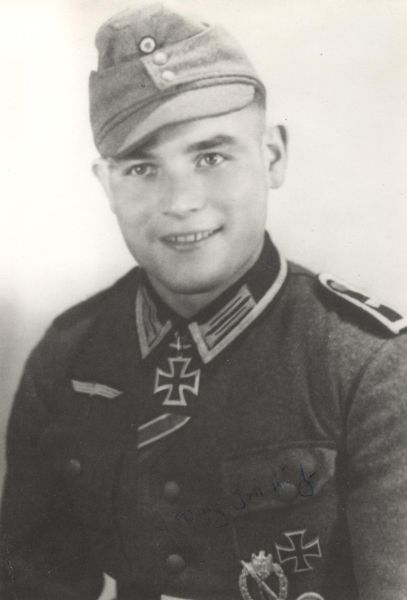