Othmar Hermes finally reached the rank of Leutnant during the Socnd World War.

After the war he served with the Bundeswehr from May 11th, 1946 until September 30th, 1982. Here he finally reached the rank of Oberstleutnant.

During the German relief of Kovel in April 1944, the 6./Grenadier-Regiment 464 formed the spearhead of the German effort to capture a commanding hill in the middle of the rough terrain within the Turja sector, southwest of Kovel. The capture of this hill from the Soviets was crucial for the continued advance to the trapped defenders of the city. However the German attack ground to a halt due to heavy and effective Soviet blocking fire from well-camouflaged Soviet MG and mortar positions. As a result the communication links even within the Kompanie, as well as to the neighbouring Kompanien, were broken. The Soviets now launched their own counterthrust in an attempt to decisively swing the battle in their favour.

In this critical situation Gefreiter Hermes decided to finally storm the hill with a few bold comrades from the Kompanie headquarters. The Soviet positions and MG nests were eliminated in close combat, and the hill was held against subsequent Soviet attempts to retake it. As the hill was currently under fire from both Soviet and German artillery, and no radio contact was available, Hermes fired a red signal flare that alerted the German units to the fact that the hill had been taken. However immediately afterwards he and his comrades received severe wounds from shell splinters, with Hermes himself losing his right arm. However by now the rest of the Kompanie had come to reinforce the defenders on the hill, and the wounded men were evacuated from the battle.

In recognition of his independently conducted and heroic actions, which significantly assisted the German relief effort at great personal cost, Hermes would be decorated with the Iron Cross First Class and later the Knights Cross. At the time of his award he was, at 19 years old, the youngest Knights Cross Holder in the entire Wehrmacht. 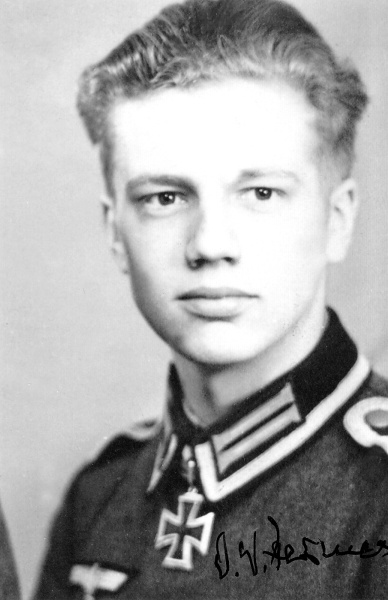