Christian Frederick von Schalburg was born in Russia April 15th, 1906, the son of Danish Theodor von Schalburg and Russian Elena Vasiljevna. He received his military training in the Czaristic Army. During the October Revolution of 1917, he fled to Denmark. He subsequently served as Captain in the Kongelige Livgarde, the Royal Danish Guard.
From 1939 onwards, he was in command of the Youth Guard (NSU) of the Danish National Socialist Party, the Danmarks Nationalsocialistiske Arbejderparti (DNSAP). These troops formed a considerable part of the Danish volunteers fighting on Finnish side in the Winterwar of 1939-1940 against the Soviet Union. As a consequence, when German troops invaded Denmark, May 9th, 1940, Von Schalburg was still in Finnland. September 1940 he joined the Waffen-SS and was posted to the 5.SS-Panzer-Division "Wiking" in the rank of Hauptsturmführer. At the beginning of Operation Barbarossa, he was posted to the staff of this division. April 27th, 194, he joined the Frikorps Danmark which was in the process of being established In Trekau. March 1st he was given command of the corps in the rank of SS-Obersturmführer. May 8th, 1942 he was, together with this unit, airlifted to the Festung Demjansk to join in the fighting there. During the first attack by the unit, June 2nd, 1942, he stepped on a landmine and was killed by flying shrapnell. June 3rd he was promoted posthumously to SS-Obersturmbannführer, effective as from June 1st. 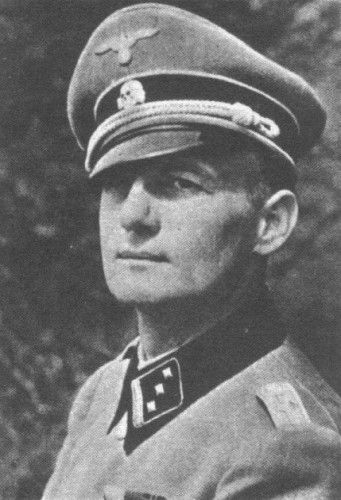