John Hopgood was educated at Marlborough College and joined the RAF in 1940 and was after his training posted at No, 50 Squadron as a pilot.
He was subsequently selected from No. 106 Squadron to join No. 617 "Dambuster" Squadron and participated in operation Chastise.
On his way to the dam, the Lancaster was hit by flak in one of the wings and lost an engine.
Still able to continue, at 00:32 Hopgood began his run to the dam but was caught in cross fire by German guns of both towers on the dam. This caused a blazing fuel fire resulting in the loss of a second engine.
The Wallis bomb was released a fraction too late and bounced over the dam hitting and destroying the power station.
With the loss of two engines, Hopgood was unable to gain sufficient altitude for the crew to bail out safely. Two crew members, bomb aimer John Fraser, and tail gunner Tony Burcher, were able to escape. At a mere two hundred feet above the ground, they were two of the lowest successful bailouts during the war. Both survived but spent the rest of the war as POW's.
The Lancaster crashed 3 miles from the dam in a field killing Hopgood, Earnshaw, Brennan, Minchin and Gregory.

Citation:
"Flt. Lt.. Hopgood has participated in a number of successful attacks on enemy and enemy occupied country. On one occasion he made a low level attack on Rostock and also bombed Wa.nemunde from only 2,000 feet in face of intense opposition."

Citation:
"This officer has completed many successful operations since being awarded the D.F.C, One night in August, 1942, he was detailed to bomb objectives at the port of Gdynia. This attack, which was pressed bome with the greatest determination, achieved excellent results. On another occasion in October, 1942, during the daylight attack on Le Creusot, Fit. Lt. Hopgood participated in a particularly daring attack on the electrical transformer station, which was bombed effectively from a height of only 500 feet."
Second DFC awarded as a bar for on the ribbon of the first DFC. 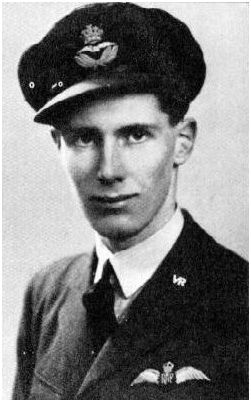