D-Day and subsequent military operations
On 6 June 1944, the first beach clearance parties from Number 3 Platoon landed at Bernieres-sur-Mer and St-Aubin-sur-Mer with the Queens Own Rifles and North Shore Regiment. They touched down at H-Hours and the infantry landed five minutes later. In those first five minutes, the Sappers were expected to have cleared most obstacles to allow infantry to advance with a minimum of casualties and then to continue working their way forward with the incoming tide preparing ways forward for successive waves of landing craft carrying more engineers, infantrymen, guns and tanks. Once off the beaches by mid-morning, they led the infantry inland clearing booby traps and mines along the roadways. As a dispatch rider, Raymond was awarded a Military Medal for bravery on D-Day.

The Battle of Normandy continued until late August when Canadian and US forces closed the Falaise Gap. The 16th Field Company had supported the 3rd Division throughout these battles and continued with them over the Seine in early September. Over the next month, they worked to capture and re-open the Channel ports. By the first week in October, they were near Bruges with orders to prepare for the 7th Brigades assault over the Leopold Canal in the coming week.

Early on the morning of 6 October 1944, the 3rd Infantry Division launched Operation SWITCHBACK, the assault over the Leopold Canal, as the first step in clearing the Breskens Pocket. The 16th Field Company had a kapok footbridge across the Canal at 0540 hours for the Canadian Scottish Regiment on the right. On the left, efforts to put in a bridge to support the assault of the Regina Rifles enemy fire held up completion until nightfall. In one of the attempts to get the second bridge across, the sappers launched seven bays before intense mortar, machine gun and sniper fire drove them back behind the dike. For the next few days, the company struggled to keep the crossing open despite enemy shelling. However, on 8 October when the company was attempting to move Wasps flame throwers across the canal, the shelling was so intense, their efforts were called off until the following days. In the shelling, Raymond was badly wounded in the abdomen and thigh. His left foot was severed. He was taken to Number 6 Field Dressing Station and died of wounds ten days later. He is buried in the Adegem Canadian War Cemetery. He was 25 years old.

Two of his brothers served overseas during the war. His twin brother Ralston was also in the 16th Field Company.

Recommendation:
Sapper Foster's job as despatch rider during "D" Day called on him to maintain contact with the Engineer Reconnaissance Officer with the leading infantry and No.2 Platoon Commander, following immediately behind, doing mine clearance of the road. During the whole of "D" Day he made repeated trips along the road between Bernières-sur-Mer and Le Mare, regardless of enemy snipers and mortar fire, and on more than one occasion, travelling when the infantry along the road were pinned down.

Raymonds young widow was presented with the Memorial Cross in Ottawa in recognition for his sacrifice for Canada. 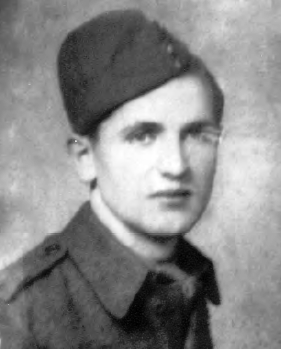