His Knights Cross actions are outlined in the following wartime excerpt
Oberst Fries is a model regimental commander, one whose presence has repeatedly inspired his Regiment and whose initiative has brought about crucial successes for the combat of the Korps. In particular, through his units storming of the Dudershof heights, he decisively partook in the breakthrough of the inner and outer defensive rings around Leningrad. This in turn laid the foundation for the attack of our armoured troops up to the gates of Leningrad itself. Furthermore, due to his breakthrough of the Nemoschtschenaja position, he decisively opened the way for the Division and the Korps to swiftly advance towards Kalinin.
His role in the swift capture of Pskov also contributed to his receiving the Knights Cross.

The following press article, dated 05.02.1944, describes how Fries would receive the Oakleaves to his Knights Cross
Since the enemy landing at Sicily Generalleutnant Fries and his 29. Panzergrenadier-Division have been involved in near ceaseless combat, and been twice mentioned in the Wehrmachtbericht (18.08. & 18.12.1943). The Division has fulfilled its missions even under the most difficult of circumstances in an exemplary manner during the heavy combat at Sicily, the battle of Salerno and the defense of the southern Italian front. The divisional commander (who mostly stayed with his foremost troops in heavy fighting) repeatedly inspired his Grenadiers to higher achievements by his own example. Under his leadership the Division has achieved great successes even against far numerically superior enemy forces.
His Divisions accomplishments in December 1943 during the fighting around Cassino also contributed to his receiving the Oakleaves. According to field marshal Kesselring, What the 29. Panzergrenadier-Division achieved in the rugged mountains in the middle of the Reinhard Line was truly unparalleled.

The following press article, dated 15.08.1944, describes why Fries would receive the Swords to his Knights Cross

During the heavy fighting west of Lake Trasimene, and in the last weeks south of Florence, the 29. Panzergrenadier-Division fended off numerous allied attacks (supported by strong tank/artillery units) with heavy losses for the foe. Furthermore it also successfully conducted numerous bold, successful counterattacks of its own during this time. Alongside the bravery and will to fight of all members of the Division, these successes are above all the achievement of its commander. Through his skillful and flexible leadership he repeatedly forced his will upon the enemy. In all difficult situations at the hotspots of the fighting he endowed every one of his soldiers with his fanatical will to win, and through his example of highest bravery he inspired them to superhuman achievements. 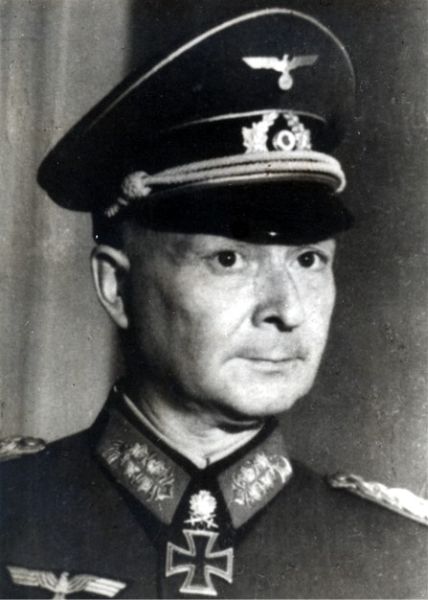