During the fighting southeast of Orel Hauptmann Hans Fritsche and his mid-German Grenadier-Bataillon were deployed against enemy troops that had penetrated in the sector of the right neighbouring unit. Through a combination of swift action and outstanding bravery, he was able to stop a further advance by the Soviets in a display of independent action.

This action took place near Stara Iwanowka (in the Liwny area), where Fritsche and his men were serving as flank protection for the Division. Here Hauptmann Fritsche managed to hold off the attack of two Soviet rifle regiments for an entire day via repeated counterattacks of his own. By this he prevented a hostile breakthrough, and so he would be recognized accordingly.

Awarded for his leadership achievements during the summer battles in the Orel area. He repeatedly managed to eliminate the penetrations of strong opposing forces with minor units of his own, always while leading from the frontline. His Divisional commander considered him a rock in the storm on account of his reliability and ability to salvage dangerous situations. 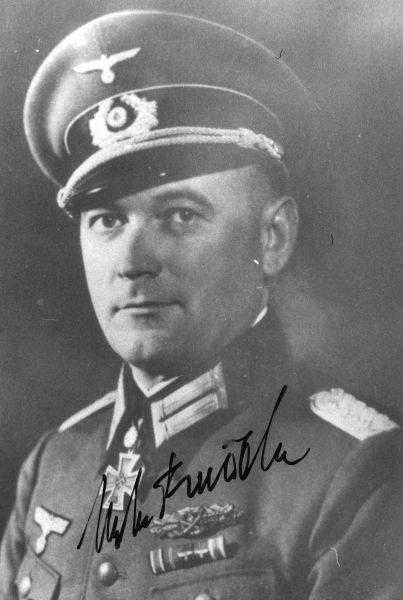