On the 28.06.1941 the Vorausabteilung of the 1. Infanterie-Division advanced towards Riga via Bauske. After swiftly taking the latter the advance continued, with the ultimate goal being the Daugava bridges in Riga. After reaching the citys edge at 10:30, Oberleutnant Geißler and his Sturmgeschütze rampaged through the city and discovered a still intact pontoon bridge. He drove over to the east bank on his own initiative with a squad of flamethrower-equipped Pionieren and 3 other Sturmgeschütze, however just after this the pontoon bridge as well as the nearby railway bridge were both blown up.

Oberleutnant Geißler thus formed a small hedgehog position, and defended against constant enemy attacks for the entire day. However the Pioniere were slowly whittled down, and the Sturmgeschütze destroyed by enemy AT teams one after another. Eventually only Geißlers vehicle was intact. After being wounded himself twice he abandoned the vehicle along with his crew. Now, as darkness set in, the survivors ran to the river and tried to reach the western bank via the destroyed railway bridge. Engaged by an MG, the last three Pioniere were killed and Oberleutnant Geißler received his third wound of the day. Only Geißler and three other men, all wounded, returned to German lines.

However through this bold deed Geißler had created the basis for the eventual capture of Riga. He would be awarded the Knights Cross of the Iron Cross in recognition of his actions.

Awarded for receiving a fifth wound on August 7th, 1941. 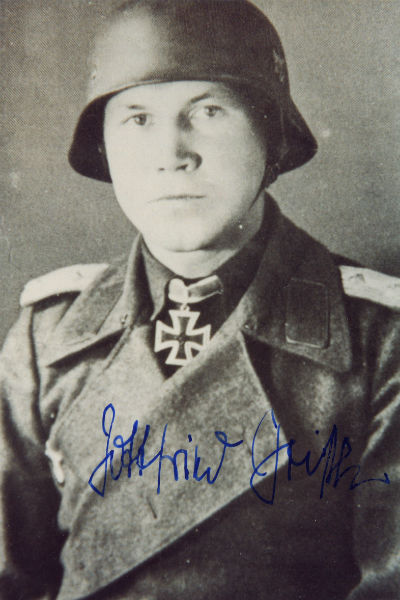