In the execution of operations on Crete, the commander of a Mountain Division, General Major Ringel, and as commanders of mountain regiments, the Colonels Utz, Jais and Krakau and the commander of a mountain artillery regiment, Lieutenant Colonel Wittmann, along with their subordinate troops had a decisive share.

During the Crete Operation General Ringel was the leader of the main group. Utilizing the paratroopers who had taken control of the Maleme Airfield and the mountain troops who had been airlifted there, he repulsed the enemys counterattacks, smashed the enemys tenacious defense near Canea and seized control of the western part of Crete. With this he ensured that only part of the enemy force could be evacuated by sea, and that strong elements of the British-Greek island garrison would fall into German captivity.

The following press article (dated 28.10.1943) describes why Ringel would receive the Oakleaves to his Knights Cross

On 25.10.1943 the Führer awarded the Oakleaves to the Knights Cross of the Iron Cross to Generalleutnant Julies Ringel, commander of a Gebirgs-Division, as the 312th soldier of the Wehrmacht to be so decorated.

Generalleutnant Ringel and his particularly distinguished 5. Gebirgs-Division (mentioned in the Wehrmachtbericht of 12.08.1943) have already proven themselves on the field of battle. In the Balkan campaign the Division displayed its offensive spirit by breaking through the Metaxas Line. The former Generalmajor and his brave Gebirgsjäger also had a major role in the capture of Crete. Together with Fallschirmjäger, the Division seized the area around Chanis and the western part of the island, thereafter launching a vigorous pursuit that ensured only small forces of the British-Greek garrison were able to escape the island by ship. It was thanks to Ringels skillful leadership that the bulk of the enemy forces here could be taken prisoner. For this he was awarded the Knight's Cross of the Iron Cross on the 13.06.1941.

In the East the 5. Gebirgs-Division has again shown its dependability. It was involved in the great successes on the northern sector of the Eastern front, and it added many new laurels to its name during its participation in the numerous battles south of Lake Ladoga. Here the General repeatedly distinguished himself, and by his care he demonstrated that he is like a true father to his men. Following his principle of sweat saves blood, he energetically drove his men into building up strong defensive fieldworks and with this created the necessary preconditions for the great defensive success during the third major battle south of Lake Ladoga.

In the course of this great battle the divisional commander could always be found at the front with his men, whom he assisted in both word and deed. When the much larger Soviet forces were able to penetrate on the left wing with tanks, Generalleutnant Ringel immediately recognized the danger being posed to the entire Korps front. He proceeded to gather up all available forces and personally led a counterattack which ejected the hard-fighting enemy from the old main battle line. In 18 days of bitter fighting the Division was able to maintain its positions, repel 20 major enemy attacks and inflict bloody losses on the enemy (destroying, among other things, 65 Soviet tanks).

Grand Cross to the Order of Saint Alexander 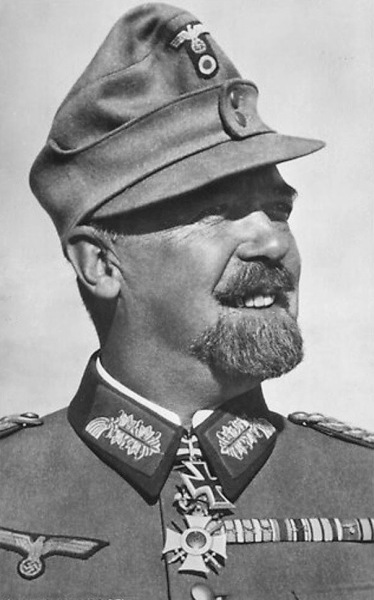