William Walton was the Gunner on board Sterling IV LK200. Other crew members were Pilot, F/Lt. G.M. Rothwell, Fl/Engineer F/Sgt R.W. Willmott, Navigator F/O R.A. McKitpatrick, WT/Op F/O J. Hulme, Bomb Aimer F/O T.R. Court and Despatcher F/O C.D. Shaw.
Also on board were the Dutch agents Tobias Biallosterski and (WT/Op) Pieter de Vos.and 12 containers and 4 parcels.
After at first encountering bad weather, the agents and containers were dropped succesfully.
The crew of the Stirling was less fortunate. En route home, which lead them crossing the waters in between the islands of Texel and Vlieland, the aircraft probably caught the steel cable of a drifting barrage balloon and crashed.
Court, Hulme and Walton died. The others were imprisoned. 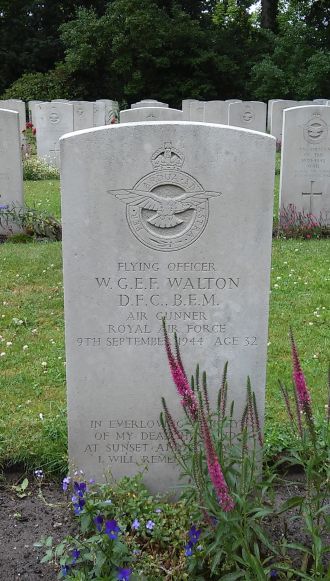