Manfred Pernass is one of the three most famous members of the command unit 150. Panzerbrigade (Einheit Stiehlau). Born in Goleniów, West Pomerania.

At the time German (Gollnow) now Polish. For an application for an award his father's career was preserved in the Landesarchiv Brandenburg. As a result, we also know when the family came to Wusterhausen. Willi Pernass, who aspired to an administrative career, originally came from Berlin. After returning from the First World War in 1916, he was given his first job as a civil servant in the financial department of Goleniów. Shortly after the birth of their child, the family left early in 1922 for Wusterhausen / Dosse. The family lived on the "Adolf Hitler Platz". The name of the Square changed several times. First "Adolf Hitlerplatz" then the address "Roter Platz" and today the address "Am Markt". The address would not normally be worth mentioning. The house, in which several parties lived, turns out to be a special jewel. It is known far beyond the region as the "Herbstsch Haus". The house, built in 1764, is a protected monument. The name owes it to the merchant who bought the house in 1917. The building was recently renovated. Nowadays the house contains tourist information, a library and a local history museum. The Pernass couple were quite active within the Wusterhausener NSDAP. Father Pernass joined the party in August 1932, his wife in January 1933. Manfred had just turned 18 when he too became a member of Hitler's party. In addition to the activities of the Pernass couple, research in the Landesarchiv Brandeburg also revealed how members of the SA (Sturmabteilung) and Mayor Köhler, who was also NSDAP-Ortsgruppenleiter, made each other's lives miserable. Willi Pernass, who, according to the documents, was an intimate of Mayor Köhler, suffered from this. Willi Pernass was fatally affected by a heart attack on 05.02.1944.

Only one document was found in the Landesarchiv of Brandenburg that related to Manfred Pernass. In a short letter, Direktur Wegner was asked to exempt Manfred Pernass from education from 7 to 15 September (1938) since Manfred had been designated as a march participant for the Reichsparteitag (Nürnberg). Dr. Richard Wegner was the director of the "Jahn-Schule" in Kyritz. At the time, an Oberschule for boys, now a Gymnasium. The extent to which both school types can be compared with each other is not discussed here.

Manfred Pernass's military career is known to have served since 1939, starting with a Kraftfahr-Ersatz-Abteilung. He spent most of his time at a Nachrichtenabteilung.
In this case too, 2 sources must be consulted. On the one hand the Deutsche Dienststelle in Berlin, on the other hand a US report. This report states that Manfred Pernass was a member of the 3. Company of the 4. Nachrichten-Ersatz-Abteilung (Chemnitz) before volunteering for his downfall. The report that also shows how he and his teammates (Günther Billing and Wilhelm Schmidt) were caught can be read on the site, see source reference below. The team picked up at Aywaille was executed in front of the camera. According to the Report of Burial, the time of execution was 2 p.m. The images of the execution are widely distributed on the internet and in the literature. No other photographic material from Manfred Pernass was found, nor are any photographs of him or his parents within the family. Sometimes a photo pops up on the internet and in literature that shows 2 German spies as prisoners of war. Dressed in thick winter coats, the 2 spies stand in front of a gate, guarded by 2 armed MPs. The claim that one of the prisoners of war shown is Manfred Pernass is incorrect. The pictured prisoner of war has a mustache and wears paper-thin glasses. Anyone who has studied the photos of 23.12.1944 well can determine that Manfred Pernass does not wear a mustache or glasses. The photo shows 2 members of the group that was executed on 30.12.1944. 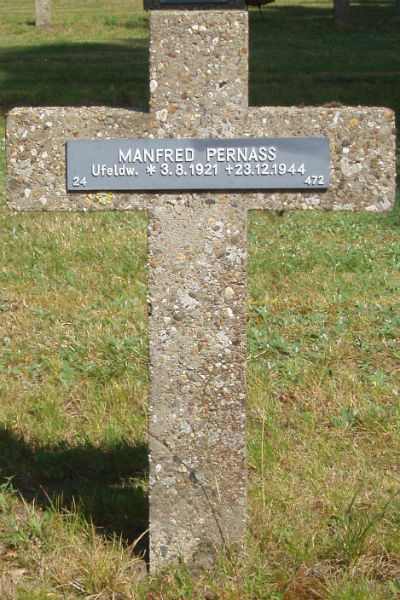