Wilhelm Schmidt is one of the most famous team in Operation Greif. The execution of this team was filmed and photographed at the time, the images can be found in various places on the internet (and in the literature). Willi was the son of carpenter Adolf Schmidt. Willi was a painter by profession. Willi was the nickname, the name Wilhelm was never used by his living sister. Very little is known about his military career. According to a report dated 31.05.1941, he served at the 20. Ersatz-Kompanie Luftgau-Nachrichten-Regiment. His identity plate also belonged to this unit. According to his sister, he served in the Netherlands, among others. During the interrogations as a prisoner of war he indicated that he came from the 5. Company of the 223 Luftwaffen-Nachrichten Regiment.

Research on the internet showed that this unit was in Lemmer (Friesland). On the site, see source reference below, there is a photo on which a charting Wilhelm Schmidt can be seen. This photo may have been made in Lemmer. But that is far from certain. In his youth, Wilhem worked as a caddy on a golf course near his home. As a result, he had a lot of contact with the English and learned the English language. Wilhelm Schmidt was considered intelligent in his environment. What motivated Wilhelm Schmidt to participate in Greif could not be traced. His sister said that her brother was not politically active. Perhaps he was promised promotion. Another possibility is that a kind of competition had arisen with his brother Fritz. But no splinter of evidence has been found for any theory. There is a lot of chaos about informing the family. There is no death certificate at the Red Cross in Geneva, so the Deutsche Dienststelle in Berlin was not informed and as a result the family was not informed. According to his sister, the family received an American newspaper during the war in which the execution was reported. In 2001 the Volksbund Deutsche Kriegsgräberführsorge informed the family. Sometime in the 1970s, the Schmidt family declared him dead. A death certificate has been found in Wiesbaden-Dotzheim, dated 26.10.1977 / 177. That deed is based on a letter from the Deutsche Dienststelle in Berlin. A cause of the chaos surrounding Wilhelm's death was probably his last field post number.

On a map that the family sent to the Red Cross in Geneva, the field post number 32397 was specified. It was stated that he was in the Netherlands / Belgium. The field post number belonged to the staff of the 10. Panzer Regiment until 1943. And we actually find Wilhelm Schmidt (without photo) in the relevant Vermisstenbildliste of the German Red Cross. It is striking that Malmedy is mentioned as the place of missing. The Vermisstenbildliste can be consulted online. Was the field mail number passed on incorrectly or was there something else going on? Wilhelm Schmidt gives the answer during an interrogation. The field post number 32397 was assigned for the Christmas post at the end of 1944. Whether the entire 150 Panzer Brigade or only command unit received this field mail number is not known.

A US Army Report shows that the team at Stoumont invaded the American territory. At Aywaille the team was stopped on a bridge. Because they did not know the requested password, their journey ended there. The report can be read on Oorlogsslachtoffers.nl, in the full biography of Manfred Pernass.

On 21.12.1944 the three soldiers were sentenced to death by a military court and on 23.12.1944 Wilhelm Schmidt died in the shotgun of a firing squad. Willi Schmidt was aware that what he was doing was unfair. 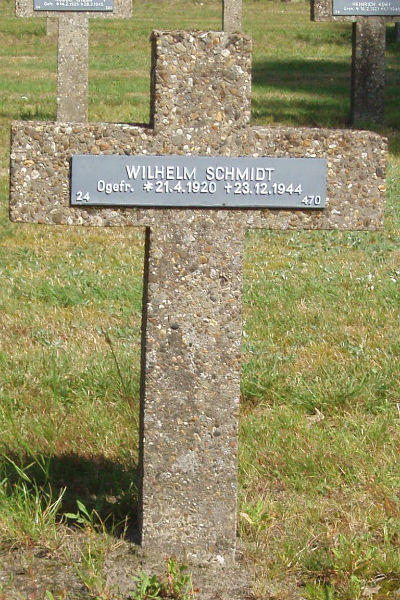