Generalmajor Hundt, who had already distinguished himself through decisiveness and outstanding bravery in early January 1945 during the capture of Torna & Szadudvarnek as well as in the fighting around Szepsi (Hungary), received orders to go to Rybnik on the 26.01.1945. When he got there he found just one Bataillon of his Division available for employment, and it was immediately sent out to strike against Orzupowitz.

The Bataillon launched a surprise thrust against the overwhelming enemy forces that had strong tank support, and was pinned down north of Rybnik. During the night the Russians suddenly attacked the city with strong forces, their only opposition here being hastily assembled alarm and straggler units. After making a deep penetration into the city, the enemy succeeded in reaching the city centre with support from several tanks. The situation had become threatening, with a very real danger that the enemy would assume total control over the city.

In spite of all the incoming bad news, the General remained the lord of the situation. Undeterred by the strong enemy fire, he rushed to every hotspot of the battle while escorted by just a single officer. At every threatened position he rallied fleeing alarm units and sent them back into the battle. As the sole senior commander he was the soul of the resistance. With great initiative and exemplary bravery he fought at the head of the alarm units, inspiring them forwards through his example and personally led all counterattacks. In this way he succeeded in recapturing all but a small part of the city by the morning, a product of countless minor actions. The General immediately organized the defense of Rybnik and the mopping up of the enemy remnants, all while acting tirelessly and intervening all over the city.

Due to this outstanding accomplishment, the key crossroads of Rybnik (crucial for the defense of the Oder) was cleared of the enemy. Furthermore the Russian objective of outflanking the left wing of the 17. Armee came to naught, and a continuous defensive line was created.

If Generalmajor Hundt had hesitated for just a moment in this critical situation, or deferred the key decision-making to others, Rybnik would have fallen to the enemy. This would have resulted in the loss of the entire coalfield that lay to the south of the city, which contained 7 pits that together provided a daily production of 10000 tons of coal. In the end however his decisive leadership and initiative proved to be the deciding factor for Rybniks destiny. 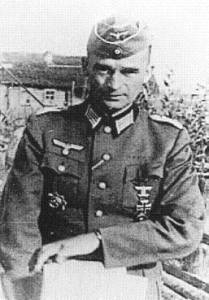