Arno was born in Gross Dirschkeim as the son of Gustav Krause, a teacher. Gross Dirschkeim is located in what was then Ostpreussen, now (Russian) the place is called Donskoje. Arno was the only child. The entire family was a member of the NSDAP. The parents since 1937, Arno became a member in 1938. The father was also a member of the Nationalsozialistischer Lehrerbund (NSLB). Arno became an apprentice at the NPEA in Stuhm around the age of 16. NPEA stands for Nationalpolitische Erziehungsanstalt, popularly also called NAPOLA. It is not known when the family left Gross Dirschkeim in the direction of Elchdorf (Kulikowo). Eventually the family stayed in Elschdorf until their dramatic end in 1945. Arno had started a medical study, while the father actually had other plans for his son. Which is not clear. Eventually all plans failed when Arno was called up for military service. The military career is only known with certainty that he started at the Luftnachrichten-kompanie des Lufthafenbreichs Heiligenbeil.

We know from a letter from an uncle that Arno was a paratrooper at the time he went to the Ardennes. His death certificate from the International Red Cross also states the 13. Fallschirm Regiment as a German unit. That would make sense for him, but has not yet been confirmed. The moment he became a lieutenant was not recorded either. At the Deutsche Dienststelle in Berlin, only the information from the Death certificate has been taken over. This shows that the investigation was very difficult, different sources contaminated each other. Which is certain is that Arno Krause was still with the Nachrichtenkompanie Heiligenbeil in March 1941. He had suffered a hernia in March 1941 and was sent a month later to that unit in Heiligenbeil. In a number of cases, personnel files (lieutenant and higher) can be requested from the Militärarchiv in Freiburg, unfortunately Leutnant Arno Krause's file is not included.

Arno Krause was in contact with an uncle (brother of the mother) before he went to the Ardennes, there is no exact date. This uncle, who was a lawyer by profession, wrote a letter to his brother in June 1949 about the last encounter and the subsequent last sign of their cousin's life. Arno volunteered for a parachute unit, this unit was led by Skorzeny. Arno told his uncle to take into account that he would be dropped behind the lines of the Americans in American uniform. His uncle tried to change his mind and told him that the war was lost. He advised that Arno, once he had arrived downstairs, would do well to get rid of the uniform and to report to the first American post with the comment that for him (Arno) this pointless war is over. Arno's uncle hoped that Arno would plead the plea. A while later (also here an exact date is missing) this uncle received a letter from Arno. He wrote that he could not take the advice because he is an idealist. Arno Krause eventually killed this idealism on 30.12.1944.

After the war, the family had to endure even more. Just before the Russians took over Elchdorf in 1945, the father first strangled his wife and then shot himself. That Mrs. Krause voluntarily underwent this is very much the question because in February of the year 1945 she had indicated in a panicky phone call that she wanted to leave. The Russian army was 10 km away from Elchdorf. The couple were buried behind the house by fellow residents of Elchdorf. A fellow inhabitant of Elchdorf reported on these events in a letter to Arno's uncle. All letters that survive the war are in the possession of the family of Arno's mother. The uncle who was a lawyer by profession continued to search for his cousin after the war. Eventually he succeeded in getting a German-language copy of the trial against Leutnant Arno Krause and the 6 other members of the group. Because certain information about the other members of this group, such as the identification plates, were not known to others, there is no doubt about the authenticity of this copy. Until now it has not been possible to get hold of the original document. In summary it comes down to the following; All members of this group are referred to as Members of the Einheit Stielau. On the night of 22.12.1944 to 23.12.1944 the 7 men (Horst Görlich, Arno Krause, Rolf Meyer, Erhard Miegel, Robert Pollack, Günther Schilz and Dietrich Wittsack) were sent on the road. Dressed in American uniform and equipped with various weapons (A Thompson submachine gun, an American 0.45 automatic, 5 stengun and a number of hand grenades).

This group consisted of two teams, the exact classification is unknown. The suppliers of both groups have been mentioned. One group was led by Leutnant zur See Günther Schilz, the second group by Leutnant Arno Krause. Both groups were given a jeep, which they had to leave at a certain place to continue on foot. Each team received a German soldier who showed them the way at the front. Then both groups walked together (in American uniform) into the American territory. The first assignment was to locate American guns that attacked German territory (Engelsdorf / Bellevaux-Ligneuville) and to destroy it. The document only states that the group was active near Malmedy. On the death certificates of the International Red Cross the place Géromont is mentioned, as the place where the group was arrested. The second assignment was to determine the strength and composition of the US Army in that area. They were then expected back in the morning (23.12.) To report and to transfer any prisoners of war that they had made. The document shows that they were on their way 15-20 minutes from the last German post, behind the front line of the Americans, when an American who had been posted in a doorway stopped the group and asked for their identification. Schilz and Pollack went to the post and spoke to him. Apparently the American immediately noticed that something was wrong. He took the two inside and the two were immediately disarmed and arrested. Schilz was ordered to call in the rest of the group. The arrest was only a formality. The arrest was at around 2:00 am (11/23/1944). The death sentences were pronounced on 26.12.1944 in Henri-Chapelle. The entire group died on 30.12.1944, in Henri-Chapelle. Here too it is not clear exactly where the judgments were executed.

In the book of Mendelsohn (History of the CIC) we find a confirmation of these events. There are, however, differences in the details. Certainly with this group, questions remain open that will probably not be answered until the original documents that are probably at the NARA are revealed. 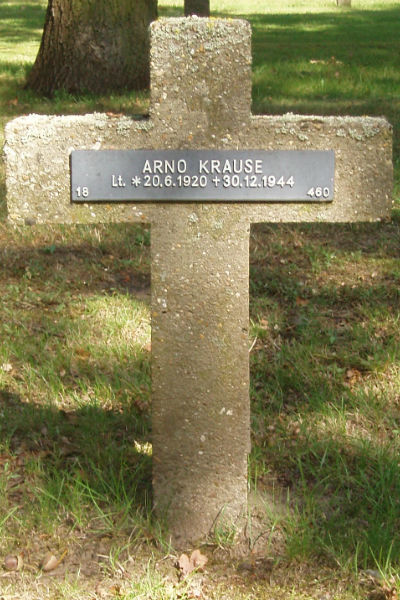