Rolf Meyer was born in Helsinki (Finland) as the son of the merchant Otto Meyer, who was active in the timber trade. It can be assumed that the timber trade is the reason the family lived in Finland. Rolf, who was only called "Rölli" in family circles, would also become a merchant. This is evident from information provided by the uncle of "Rölli" to the Deutsche Dienststelle. The oldest traces in the Finnish archives date from 1920. Family circles showed that the family returned to Germany around 1930. Otto Meyer had a business for building materials in Friendrichsgabe, a part of Norderstedt in Schleswig-Holstein. The company, which is still called "Otto Meyer Baumarkt", is no longer in family ownership.

The military career of Rolf Meyer is fairly well known, although 2 sources must be tapped. The last two units were recorded on a form by Rolf Meyers's uncle. He relied on 2 letters that Rolf had sent to his parents. Unfortunately these 2 letters are no longer found and they must be considered lost. Rolf Meyer mainly served in infantry parts on the eastern front. We also know that he was injured on his foot quite often (4 times). Rolf Meyer was part of the group of 7 that was caught near Géromont. The events there can be read at Arno Krause. Here and there we come across Rolf Meyer under the name Rolf Benjamin Meyer. This is also on the death certificate of the International Red Cross, for example. From now on the story gets a somewhat bitter taste. The death certificate states that Rolf Benjamin Meyer was found dead near Géromont (near Malmedy). If Rolf Meyer had actually been found dead, the second name could not have been on the certificate. Rolf Meyer told his father at a certain moment that he would use the second name "Benjamin" if he were arrested by Americans, hoping that a Jewish first name would help him.

When we look at his stay in the army we see him only on the eastern front. With a reasonable suspicion we can therefore attribute this idea to his intention to participate in the operation "Greif", whereby it must be explicitly stated that no one in the family knew what was going on. Rolf's father finally (1977) succeeded in finding out that his son is dead and buried in Lommel. He visited the grave with his brother-in-law. He had also learned a few things about the situation in which his son had ended up. Nothing could have been known about his son's death, since his brother-in-law continued the search for answers. Rolf Meyers's mother was all unaware of this. Otto Meyer was reluctant to tell her the truth. Having seen the death certificate for Meyer, he was immediately able to determine that something was wrong. His brother-in-law who continued the search for answers at least knew it. He filled out a questionnaire from the Deutsche Dienststelle in Berlin and added a notarized copy of the death certificate to that list. On the form he explained how that middle name came about. The certificate that is strange enough in itself has another peculiarity. The document with a original signature of Fred G. Steiner, Major Infantery Asst. Provost Marshal, does not come from the Red Cross. In Geneva they did not have a certificate from Rolf Meyer. A copy of the surfaced form has been provided to them.
All certificates that came to the Deutsche Dienststelle via the Red Cross and then to the family are provided with a registration number, a RAD number. This number is missing on Meyer's certificate, it should be on the top right.

The misery surrounding the search for his son has not been without consequences for Otto Meyer. Otto Meyer suffered a fatal heart attack in an intercity train at Hannover central Station on 14.06.1977. The next day his wife chose to follow him. In the literature on the internet you can find a photo of 2 German prisoners of war dressed in a thick winter coat. The two are guarded by 2 American MP's. In a number of cases, the names Billing and Schmidt are mentioned. That is incorrect. If you take the trouble to view the photo properly, you will see that too. One of the two is Rolf Meyer. It is the right-wing prisoner of war. On the site, see below at the source reference, you can find phot-'s of both prisoners of war. The other prisoner of war has also been identified, with him the identification is much clearer since the quality of the photo's that have been preserved by Rolf Meyer is not satisfactory. 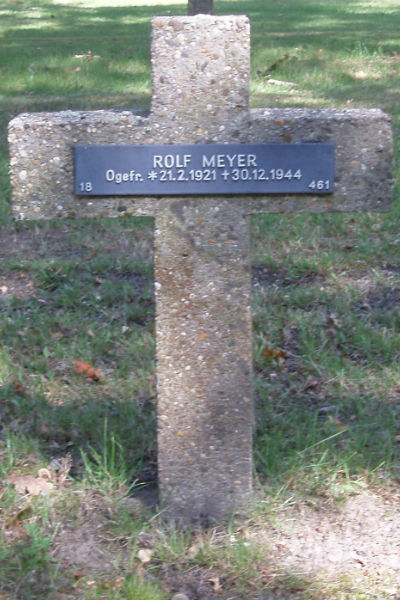