For having displayed courage, tactful conduct and great perseverance in setting up and maintaining an Allied escape route for Dutchmen through France from 1943 onwards.

"Lieut. ZEMBSCH-SCHREVE, an officer of Dutch nationality was seconded to the British Services for a special mission in July, 1943. In that month, he was parachuted into occupied FRANCE to take over an existing network of agents and expand it into an escape organisation for the passing of bodies and special materials.

Lieut. ZEMBSCH-SCHREVE fulfilled his mission with energy and soon had extended the network to cover the whole of FRANCE from the Belgian to the Spanish frontier. Up to the time of his arrest in March, 1944, Lieut. ZEMBSCH-SCHREVE was using his circuit most successfully for the exfiltration of quantities of special precision instruments urgently needed in this country. In addition his organisation was also entrusted with the distribution of wireless and other equipment to agents of other sections at various addresses. It is thought that a betrayal by one of these outside contacts was responsible for the arrest of Lieut. ZEMBSCH-SCHREVE in March, 1944, at the time when his efforts had reached a culminating point bringing his circuit into full operation.

Lieut. ZEMBSCH-SCHREVE's coolness and quick thinking enabled him to deceive the Gestapo as to the existence of his real activities and he succeeded in concealing his identity under a pseudonym which he had previously used. He was thus able to cover his connections with his own circuit, which suffered no repercussion from his arrest. He did this in knowledge that any efforts to trace him by his organisation would be rendered useless by his change of identity.

Lieut. ZEMSCH-SCHREVE, after considerable ill-treatment as a result of an attempt to smuggle a message out of prison, was deported to GERMANY from FRESNE on the 10th of August. In GERMANY he suffered the usual privations and ill-treatment in the camps of BUCHENWALD and DORA NORDHAUSEN before finally escaping during the evacuation of his camp to the east. After being over-run by the Russians, Lieut. ZEMBSCH-SCHREVE led a party of eleven men, including two American airmen through the Russian lines, and successfully crossed over into the American zone whence he made his way to Holland.

Both before and after his arrest Lieut. ZEMBSCH-SCHREVE showed great resource and courage. His conduct following his arrest was responsible for saving all those with whom he was in contact, and his escape from East Prussia to HOLLAND through both German and Russian lines indicates his determination and resourcefulness." 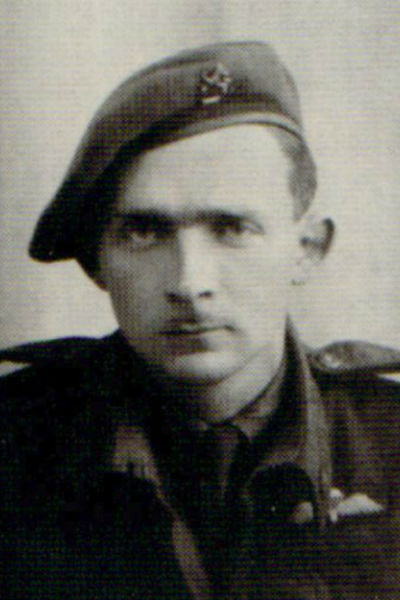