Oberst von Amsberg, commander of Grenadier-Regiment 502, repeatedly distinguished himself in the time period 17.-28.03.1945 as a result of his personal actions, inspiring energy and ruthless bravery. In this time he played a major role in the destruction of those enemy forces that were encircled in the forested terrain east of Lapuki (namely the 8th Guards Rifle Division Hero of the Soviet Union Major General Panfilov and strong elements of the 47th Guards Rifle Division).

Leading at the head of a Kampfgruppe of 5 Bataillonen, he had a twofold mission. He was to defend both the frontline facing southwards against the uninterrupted enemy relief efforts there as well as the security lines that faced northwards against any breakout attempts by the encircled enemy regiments.

The Kampfgruppe thus had to secure the necessary conditions for the closure of an extant gap in the frontline in addition to the ultimate annihilation of the encircled enemy forces.

The space between the encircled enemy troops and their own lines was minimal, and for our own forces (comprising numerous assorted alarm units) it was necessary to always have the most combat capable units at the decisive points of the fighting. This compelled Oberst von Amsberg to make numerous independent decisions whose execution was only possible when he issued them swiftly at the right place while also personally briefing his corresponding subordinates on their missions. Oberst von Amsberg mastered the art of doing just this.

In this capacity he particularly distinguished himself through his personal bravery on the 25.03.1945. On the previous day the Kampfgruppe had been forced to release a subordinated Regiment for employment elsewhere while receiving no new forces in return. However in spite of this, as well as the enemys numerical superiority and coordinated fire from all manner of weapons, their attacks from both the north and south were all initially in vain. But later in the day the enemy renewed their attack from both the outside and inside of the pocket, and those forces attacking from the inside of the pocket towards the southwest finally captured Schneisenkreuz 11, a key strongpoint of the interior defensive front, at around 17:00.

This development brought to bear a frightening potentiality that had been hanging over the Kampfgruppe for the entire duration of the battle. This was namely that the enemy would not only break out of their trap, but also encircle the Kampfgruppe itself in the process and thereby tear apart the Divisions frontline.

In clear awareness of the situation, Oberst von Amsberg rushed forward with a handful of messengers. Despite the ongoing attacks from the south, he scraped together whatever reserves could be found from the outer ring of the encirclement and launch an immediate counterattack at their head. After a violent bout of close combat the important strongpoint was retaken, and the enemy was furthermore pushed back an additional several hundred metres in the course of the counterattack.

The fighting against the enemys desperate breakout/relief attacks brought about numerous similar crisis situations in addition to this one.

During all this time Oberst von Amsberg could be found at the decisive points of the combat. Wherever he went he would assemble new forces, conduct reconnaissance and exploit any possibilities for launching attacks through the dense forests with individual Sturmgeschützen and what few men were available. At every moment his energy and bravery inspired his exhausted Grenadiers in turn, and the result was that he had a crucial role to play in the outcome of the fighting, namely that:

a) The frontline towards the south was held
b) The ~4000 man strong encircled enemy force (which operated with flexible employment of firepower and small but well-led assault groups) was totally paralyzed despite their initial superiority when they had the initiative. Their fighting morale was eventually broken, and the entire force was almost entirely wiped out in the end.

The performance of Oberst von Amsberg guaranteed the integrity of the Divisions frontline during this battle, and his swift and ruthless disposition decisively contributed to the steady strangulation of the enemy pocket.


The nomination by the troop was rejected on 9-5-1945 by the commanding officer of the Außenstelle of the Heerespersonalamt (HPA/ABranch of the Army Staff Office)Oberst Goeckebecause the intermittent commanding officers of Joachim von Amsberg had not approved the nomination. The Order Commission of the OdR processed the case in 1981 and decided: "Knight's Cross yes, 6-5-1945". The presentation date was later changed again by Fellgiebel to 9-5-1945. Von Amsberg was a member of the OdR. 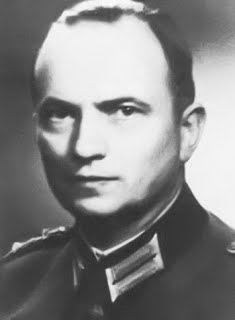