Studied in the colledge Saint-Yves in Quimper when German troops entered the city in June 1940.
19 June 1940 : sailed from Douarnenez to Sein Island where he embarked on ship 'Ar Zénith' to England to join the Free French Forces.
September 1940 : appointed to the 1st transportation group - took part to the operation in Dakar and sent to Camerun in October 1940.
January 1941 : attended the officer cadet course at camp Colonna d'Ornano in Brazzaville.
20 June 1941 : appointed as platoon leader in the Bataillon du Pacifique (BP1) coming from New Caledonia (Nouvelle-Calédonie) and led by major (commandant) Félix Broche.
October 1941 : after 5 months training in Palestina nearTel Aviv, the BP1 was attached to the 1st Free French Brigade (1ère BFL) led by general Koenig and took part in the campaign in Africa.
27 May to 10 June 1942 : campaign in Libya and battle of Bir-Hakeim where he led recce and patrols to gather precious intelligence as midship. He succeeded to lead a resupply convoy bringing through the ennemy lines amunition and water.
8 June 1942 : WIA by shrapnel to the left leg. During the break out in Bir Hakeim, charged to lead an important convoy and succeeded to reach the final destination with most of the trucks after being struck by 3 mines and being again WIA.
25 June 1942 : promoted lieutenant (sous-lieutenant) - took part of all the fightings serving in the Bataillon d'infanterie de marine et du Pacifique (BIMP) - 1st Free French Division.
1943 : promoted 1st lieutenant.
15 May 1944 : WIA by mortar shell ivo Girofano - Italy.
16 August 1944 : campaign in France, fightings in Provence, in the Vosges and in Alsace with the 1st Free French Division.
10 April 1945 : ended the war in the Auhtion mountains - South Alps where he was WIA to the chest and the hand and evacuated.
1946-1954 : served as captain in Equatorial Africa (AEF) and in Indochina where he was distinguished 4 times.
1954-57 : appointed in Madagascar.
1957-59 : appointed 18 months in Algeria as major (chef de bataillon).
1960 : back in France and promoted lieutenant-colonel commanding the Régiment de marche du Tchad (RMT).
1963 : appointed in French Guyana as military commander.
1970 : promoted colonel and deputy of the general commanding the VIIth military Region (VIIe Région militaire) then deputy of the general commanding the garrison of Paris.
1973 : retired as a brigade general. 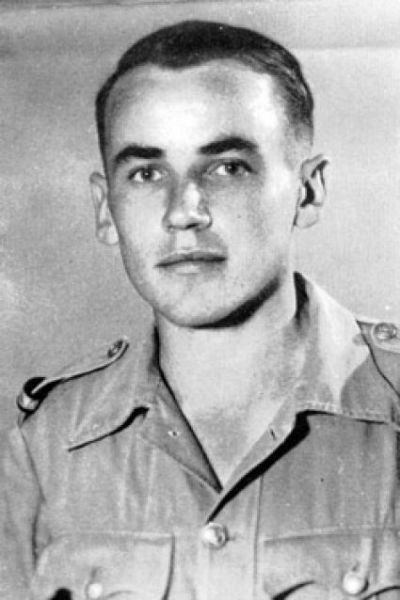