Robert Pollack was born in Germany, but he spent most of his childhood in Australia. The father who had lived in Australia before the First World War returned to Germany for a short time after the war. He got to know his future wife and Robert, their only child, was born. 1928 the family left for Australia. The father worked there as a painter, he would even have worked at the Opera in Sydney, as a play painter. Martin Pollack and his wife got the Australian Nationality in 1936, and Robert Pollack also became an Australian citizen. Because Frieda Pollack got homesick, she left with her son to Germany in 1939. A short vacation was planned. Because the war broke out the stay lasted longer than planned, she simply could not go back.

Nothing is known about Robert Pollack's school days. Upon his return to Germany, Frieda Pollack had to fill in a questionnaire at the Volksdeutsche Mittelstelle, which was involved with Germans who returned from outside Germany. This questionnaire also includes a handwritten course of life. And those documents have been preserved at the Bundesarchiv in Berlin. The course of life shows that Robert Pollack voluntarily went to the Kriegsmarine in August 1942. Because at the age of 20 he was not yet of age (at the time only at the age of 21) his mother had to give permission. Later when Frieda Pollack came home without a son, her husband blamed her for that. Not much is known about Roberts military career. The only unit outside the 150. Panzerbrigade is the Marineflakabteilung 266. Research has shown that Robert Pollack 1943 stayed in a hospital in Emden, he had suffered a hernia. Where Robert Pollack came from and where he left is not noted. Within the family, everything that had to do with Robert Pollack was destroyed in the 1970s, except for one photo. Oral was only reported that the last letter to his mother stated that he was serious about not coming back. We therefore do not know how he ended up with operation Greif. Perhaps his language skills were sought after. Robert Pollack was part of the group that was caught in / near Géromont. The 13. Pararegiment is also the last unit on his death certificate. The events in the Ardennes are described in detail at Lieutenant Arno Krause. 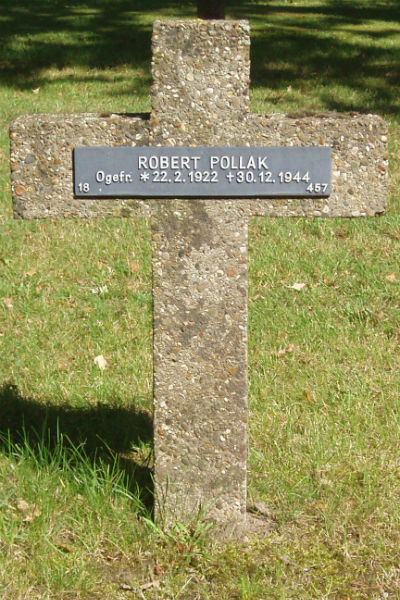