Hans Reich was born as son of merchant Otto Reich. Hans Reich is one of the three members of Greif who stand out a bit due to their older age. Hans Reich, Horst Görlich and Otto Struller are the elders of the executed participants in the operation Greif. Hans Reich attended a Gymnasium. Hans Reich then set his sights on shipping. In the archive of the "Deutsche Schulschiff-Verein, Bremen" a registration form from Hans Reich was found. The form contains information about his parents, his school history, the final scores achieved there and some medical information. The data shows that he was diligent, his behaviour was very good. He obtained a pass for English.

For those who want to know; Hans Reich was 168.9 cm tall (required was at least 162 cm) and he weighed 61.7 kg. Hans Reich was finally admitted on 09.01.1933. He started his basic training in Hamburg on 05.04.1933, and on 25.09.1933 he landed on the leather sailing ship "Schulschiff Deutschland". Division officer Friedrich Hagemeyer must have been very satisfied with the performance of the ship boy Hans Reich. Reich was the best of that course. He had reached 18.5 points. The worst performance of that course was 27.5 points. How the point system worked has not been investigated. Hans Reich became a light sailor on 01.04.1943. Also the report of 25.08.1934, now as "junior Leichtmatrose" was excellent. Hans Reich was again the best in the group. At the end of September, Hans Reich waved in the direction of Zeilscheepreederij Laeisz in Hamburg. The still existing Reederij still had documentation about the Hans Reich. Hans Reich sailed from 01.10.1934 to 03.07.1935 as light sailor on the "Priwall". On his card it says as extra information that he was very diligent.

At his own wish, Hans Reich said goodbye to shipping. This would have happened at the insistence of his later wife. She didn't like sea shipping. Far too dangerous! Hans Reich then enters the bakery world. He was apprenticed to a baker in Kassel. The father of Hans Reich and bakker v.d. Emden knew each other very well. The two got to know themselves during the First World War. Both families had become good friends. The future wife of Hans Reich was the sister of Bakker v.d. Emden. And so the circle is round again. Hansi, that is what Hans Reich was called within the family, married Ilse Schaumburg on 11.04.1942. The marriage remained childless.

The documentation of the military career appears to be reasonably in order in this case. Hans Reich joined the 3. Kompanie Eisenbahn Pioneer Regiment 68 from September 1939. In April 1940, this regiment was renamed Eisenbahn Pioneer Regiment 3. Hans Reich remained with that regiment until he reappears in the Ardennes. The last report to the Deutsche Dienststelle is from 26.12.1944, Panzerbrigade 150. Probably that date is based on the details of the death certificate. In his case, too, nothing is known about the reasons that motivated Hans Reich to participate in the Greif operation as a volunteer. A few hospital visits are still known about Hans Reich, which do not add much to what was already known about his military career. When Hans Reich became Stabsgefreiter is unknown.

Hans Reich belongs to the Team of Leutenant Günther Schulz. The other teammates were Karlheinz Weisenfeld and Manfred Bronny. The team was caught in the evening of 19.12.1944 near Liège. What happened at Liège that evening can be read in the biography of Lieutenant Günther Schulz, as the information comes from his procedural documents. With regard to Hans Reich, it is only relevant that a family member of Hans Reich sent a letter to the court in Dachau. Herbert Reich asks if they want to forward the letter to Otto Skorzeny. The letter is about gathering information about Hans Reich's stay. The letter can be found in Skorzenys criminal file (Skorzeny et all, M1106). Apart from Lieutenant Schulz, the team was executed in Henri-Chapelle on 26.12.1944. The exact location is also unknown in this case. The death certificate from Hans Reich is the only certificate with a dated signature, 29. July 1947. The unit listed there is the Einheit Stielau, Stab Solar, 150. Panzerbrigade. 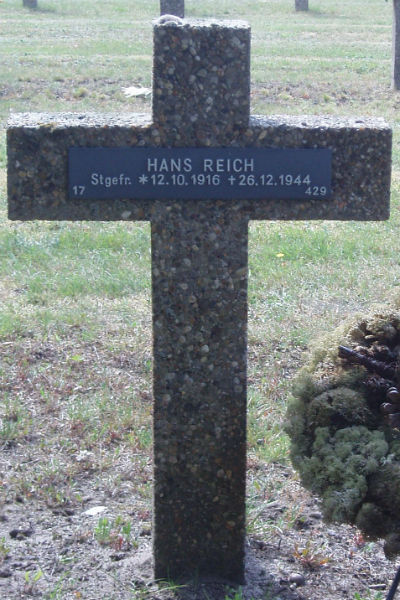