Günther Schilz was the son of factory director Robert Schilz and opera singer Katharina Schilz-Schugt. Katharina Schilz and her son Günther had a somewhat difficult relationship. The relationship with his father Robert Schilz, on the other hand, was much better. Robert Schilz was director of "Kandem N.V.". Kandem was a subsidiary of "Körting and Mathiesen" from Leipzig. The company produced lamps, spotlights, etc.; this can be found in the old advertisements of the company. The relocation route of the family could be reconstructed using the old files from the Chamber of Commerce (National Archives). It is not known when the couple came to the Netherlands. 1922 the family moved from Breda to Ginneken. Ginneken was annexed by Breda in 1942. In 1928 the family moved to The Hague, to the Van Mauvestraat. Within The Hague, the family moved again, that was in 1933. Until after the war, the family lived in the Van Zaeckstraat. In May 1944 Mrs. Schilz left the Netherlands. Robert Schilz, presumably 1946. Günther Schilz was deregistered from the personal register of the municipality of The Hague on 23.09.1946; reason: left with unknown destination.

Günther Schilz was a student at the German Gymnasium in The Hague. After school, Günther Schilz opted for an officer career with the navy. Günther Schilz is known as a professional soldier. Günther Schilz was the only member of the family at the NSDAP since 01.03.1941. An uncle (brother of the father) kept a family chronicle. Some of the information to be read here comes from that chronicle. That uncle also made some notes about Günther Schilz's military career. It is stated in the chronicle that the training lasted almost four years, that he was employed by the "Marine-Luftwaffe" and that he also sailed one-man submarines. Unfortunately, further details are missing.

In anticipation of the end of Günther Schilz, one more entry from the chronicle concerning Robert Schilz must be mentioned here. Robert Schilz was detained by the Americans from July 1944 to April 1945. An American officer suspected him of being a German officer dressed up. To find out more about Günther Schilz's military career, we have to delve into the documentation of the Deutsche Dienststelle.

Günther Schilz has served on the slaughter ship "Scharnhorst" and the light cruiser "Nürnberg". He followed various courses. Such as at a Kampffliegerschule, Marinenachrichtenschule, Marineflakschule, U-Ausbildungslehrgang, Torpedooffizierslehrgang and a Baulehrgang für U 321. For the exact order and units, the complete list can be consulted which can be found on the site mentioned at the bottom of the source reference. Günther Schilz was named Leutnant zur See on 01.07.1943.

Neither at the Deutsche Dienststelle nor in the family chronicle can you find anything about his way to the 150. Panzerbrigade, the Einheit Stielau. The circumstances under which Lieutenant Schilz was en route in the Ardennes and came to an end can be read by Lieutenant Arno Krause.
There is a photo with two German prisoners of war, captured in the Ardennes, in circulation. The two are guarded by 2 armed MPs. According to the various sources, these were Günther Billing and Wilhelm Schmidt or Manfred Pernass, depending on which source they consult. There is a good photo of Günther Schilz. The prisoner of war shown on the photo in question is Rolf Meyer, the left is clearly Günther Schilz. On the site, see source reference, the faces are mounted side by side. There is no doubt about it. 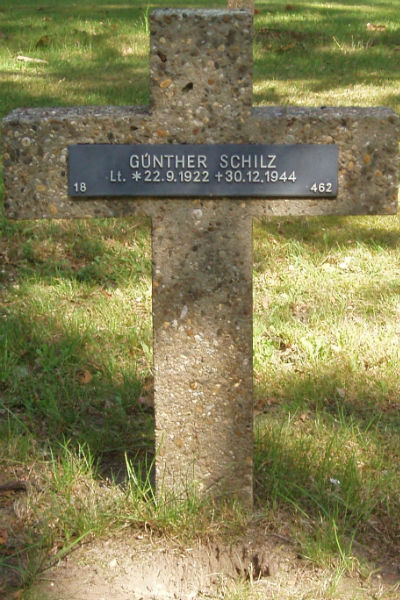