Little is known about his military career, since only two units are known at the Deutsche Dienststelle (now part of the Bundesarchiv). He started on September 1, 1940 with the 2. Kp. Flieger Ausbildungs ​​Regiment. The 2nd report that was preserved is from January 27, 1942 Wetterzug Luftflotte. He was once in a hospital due to illness, in 1942 from January 27 to February 2. That was the Luftwaffenlazarett in St. Gilles (Belgium). His daughter has very little information about her father. As with most other families, this topic has hardly been discussed. His daughter only has 2 photos of her father. One photo shows Dietrich Wittsack in a tropical uniform. Wittsack's daughter knows from her mother that he has been in Africa. Nothing is known about this. Dietrich Wittsack was part of the group around Lt. Arno Krause. The events of the time can be read at Arno Krause. Dietrich Wittsack died knowing to leave a pregnant woman behind. His daughter is struggling with it to this day. Certainly also because the motivation to participate in operation "Greif" is not at all clear. Because of the relationships between the family members, she considers it possible that he wanted to make an impression with his father. 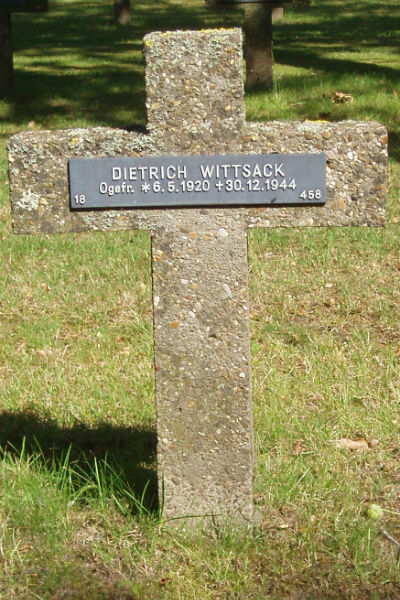