"He displayed conspicuous gallantry and intrepidity at the risk of his own life, above and beyond the call of duty, in action involving actual conflict with the enemy on 21 November 1944, near Hürtgen, Germany. S/Sgt. Minick's battalion was halted in its advance by extensive minefields, exposing troops to heavy concentrations of enemy artillery and mortar fire. Further delay in the advance would result in numerous casualties and a movement through the minefield was essential. Voluntarily, S/Sgt. Minick led 4 men through hazardous barbed wire and debris, finally making his way through the minefield for a distance of 300 yards. When an enemy machinegun opened fire, he signaled his men to take covered positions, edged his way alone toward the flank of the weapon and opened fire, killing 2 members of the guncrew and capturing 3 others. Moving forward again, he encountered and engaged single-handedly an entire company killing 20 Germans and capturing 20, and enabling his platoon to capture the remainder of the hostile group. Again moving ahead and spearheading his battalion's advance, he again encountered machinegun fire. Crawling forward toward the weapon, he reached a point from which he knocked the weapon out of action. Still another minefield had to be crossed. Undeterred, S/Sgt. Minick advanced forward alone through constant enemy fire and while thus moving, detonated a mine and was instantly killed." 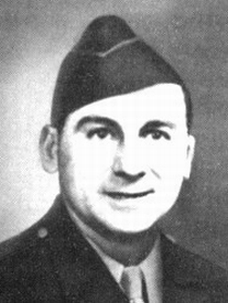