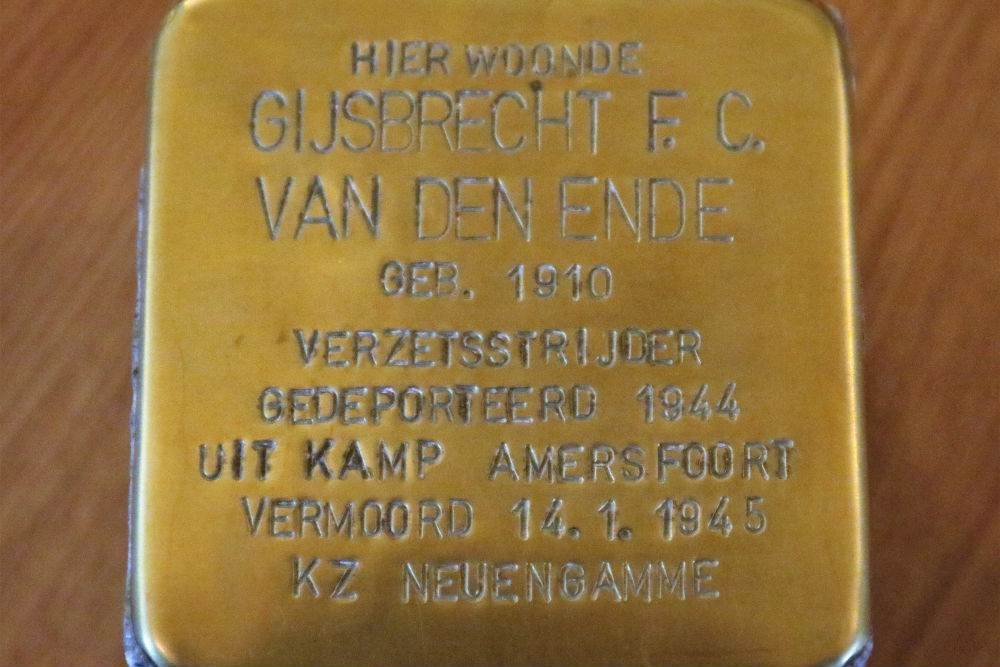 Gijsbrecht (Gijs) was born on 5-1-1910 as the son of Marinus Cornelis van den Ende and Catharina Francina de Buck in Middelburg. He was married to Willemien (Wimmie) Snethlage in Middelburg on 5-6-1941, born 19-4-1918 and died. 25-6-2001 (83) in Castricum. On May 24, 1942 they had a son Marinus Cornelis (Marco). After the war she started studying medicine and until her retirement worked as an institutional doctor at a psychiatric institution in Bakkum near Castricum. Gijs's belief was: Ned. Reformed.
He was a lawyer and attorney in Rotterdam and then State Inspector of Traffic in Zwolle. They lived at Van Deldensweg C 287/14, in villa "Deldenschekamp", now "Deldensenk" van Deldensweg no 9 in Hattem. Several Jews and others (including a brother-in-law) probably also went into hiding here.
He was in the resistance and was betrayed and arrested in Winterswijk on 9-6-1942 on suspicion of espionage and via Scheveningen (tortured in 'Oranjehotel') on 17-11-1942 to hostage camp Haaren (NB) where he happened to be transported together. sat with his brother Johan (hostage). And afterwards he was transferred as a prisoner to Camp Amersfoort on 9-10-1943 with camp no. 2796. He was a so-called "Nacht und Nebel" political prisoner. Subsequently, he was finally transferred again with the infamous transport of Wednesday 11-10-1944 (including the people of Putten who were arrested from the raid there) to KZ Neuengamme (D) III 167 with camp number 56466 and where he arrived on October 14.
All people around this number have been in Meppen-Versen. That is quite a large group. It seems that Gijs has followed the same route. Most likely he was taken back from Meppen-Versen to Neuengamme by one of the two weekly sick transports, where he died of an intestinal infection at Hausdeich 60 on 14-1-1945 at 08.00 am.
Posthumously he was awarded the resistance memorial cross.