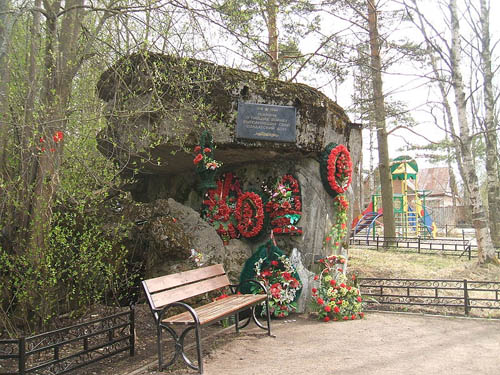 This bunker was constructed in 1938 as component of the KaUR (Karelskij Ukrepljenyj Rajon), the northern part of the Stalin line. It was one of the biggest structures in the region with walls of 2 meters thick. It was captured by the Fins on 11 September 1941, during the Great Patriotic War (1941-1945). The Red Army launched several counterattacks to recapture "Millionaire", between 1941 and 1944. The last counterattack occurred between 9 and 10 June 1944 and started with a 2,5 hours long heavy artillery barrage. It did not broke the Finnish defence, so the Soviet soldiers were forced to attack the heavily fortified bunker and it's surrounding trench system with manforce. When the Soviet soldiers reached the main bunker, it exploded from within in front of their eyes.

There is not much left of "Millionaire" as can be seen on the picture below. A memorial plaque commemorates the Soviet soldiers who fell while trying to recapture the bunker.