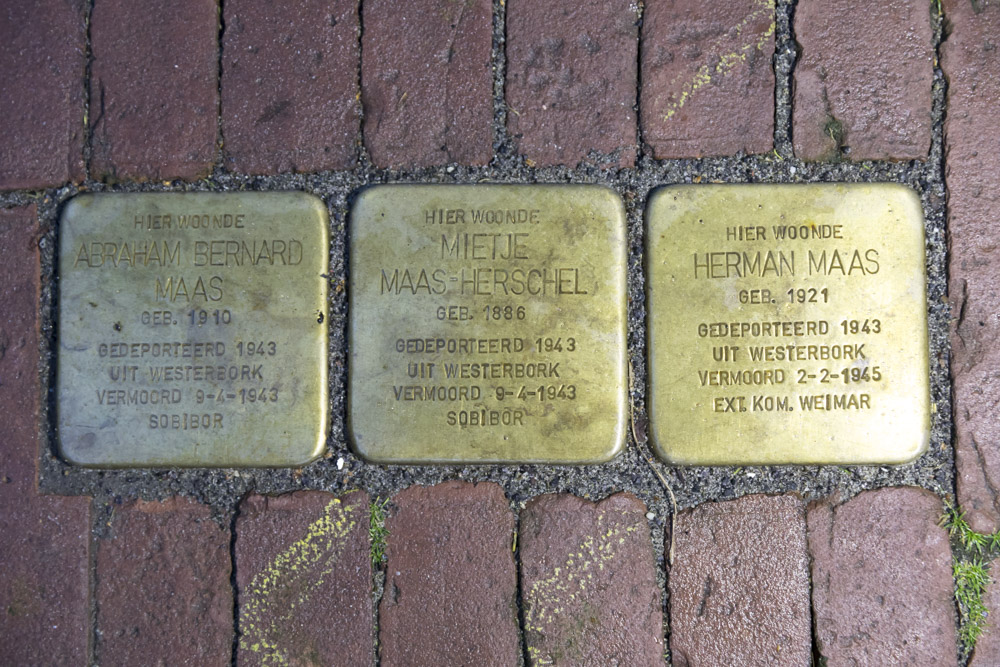 During the laying of the stones a speech was held by grandson Dominic Herschel:
"I am here representing my Australian mother, brothers, sisters and family to say a few words on behalf of my late father Izak (Jack) Herschel who lived with his parents and three brothers in the home above this bicycle store at Grotestraat 64-66 from 1939 until 1942, after re-locating from a nearby home where they had lived for 20 years.

My grandfather  Levie Herschel  came to Eibergen to marry Aaltje Maas in February 1909. Aaltje was the youngest of five children from a family in the village here.

Levie and Aaltje first lived at Grotestraat 114 further along from here, where Levie established a butchers shop. This business was known locally as the Wagemakers butchery. They and Aaltje lived above the shop together with their sons Hartog, Abraham, Eleazer and my father Izak.

The family moved into this house at Grotestraat 64-66 on 30 October 1939. By this time Levie had closed his butchery and was now a cattle trader selling into the Amsterdam meat market.

In early October 1942, German soldiers came to this building, taking my grandparents and three of their sons as prisoners. All five were transported to concentration camps, which they did not survive. Levie and Aaltje died within days of being taken prisoner. Last Monday, October 8, marked the 76th anniversary of their death.

Michiel van Thijn was also living in this house in October 1942. An antique dealer from Oosterbeek near Arnhem, Michiel married Karoline Maas, the oldest sister of my grandmother Aaltje Maas. After Karoline died on 20 September 1940, Levie and Aaltje invited Michiel into their home. The German soldiers took Michiel prisoner on that same day in October 1942 and he  like Levie and Aaltje  perished on October 8 1942.

About 10 days before the German raid, my fathers mother Aaltje arranged with Father Bernardus Kaeter, the senior priest at St Mattheüs Church in the Grotestraat near here, for Izak to live secretly in St Mattheüs Rectory. My father thereby avoided capture and so survived the war.

In a memoir that my father Izak published on his 90th birthday in 2011, he expressed fond memories of playing football with other young boys in the neighbourhood, first in the cobblestone lane leading to a tannery and later in a field near the railway station.

If my father could be here today, he would be proud that his Dutch family is being remembered in the laying of stolpersteine right here.

The Herschel family from Australia thanks all who contributed towards making todays event possible, especially the Stichting Ik vraag me af."