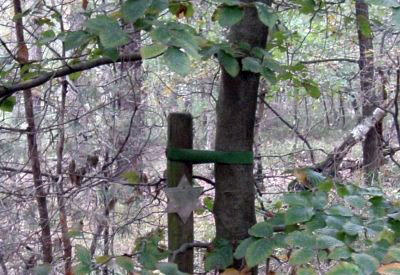 This monument isn't exclusive for it's construction but for it's place and story. It is situated on estate het Lankheet next to the van Heek family grave. This monument is placed on the spot where 20 Jews hided for the Germans in a secret shelter. Unfortunately they were betrayed and transported to Auschwitz. Only van Heek and forester Loman, who was employed by Van Heek and the residents of the farm 'de Opasser' at the Assinkweg 14 knew this, who has betrayed them is unknown. The forester and his son was then arrested by the Germans, they were later released. Hunt warden Spikker and his wife were also arrested and interrogated after a diary of Jopie de Lieme was found. After 8 days they were allowed to return home, after that Spikker went in to hiding.