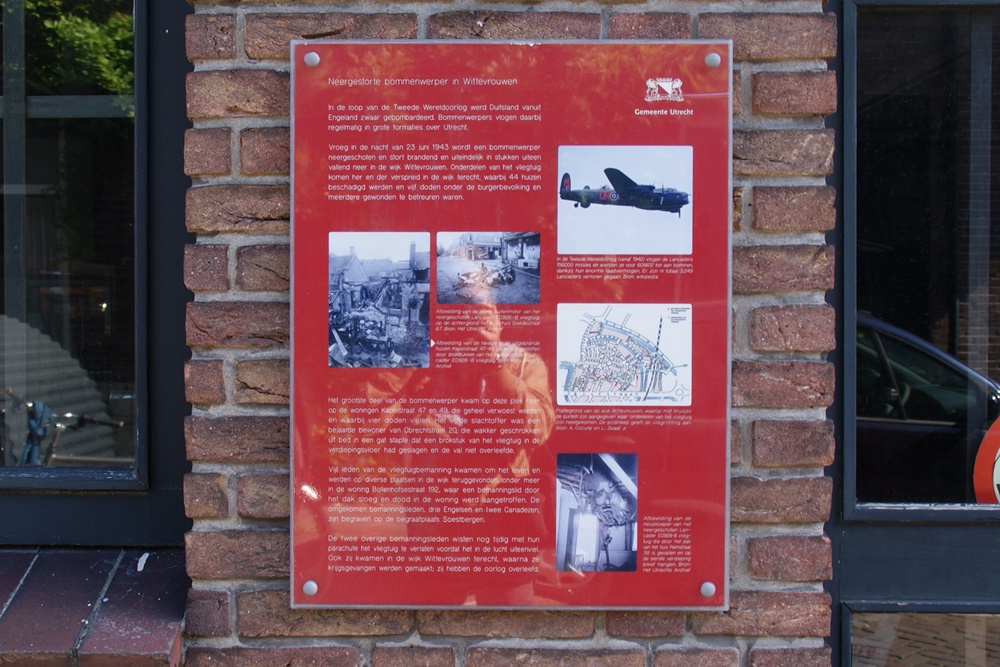 Text on the memorial (translated):

In the course of the Second World War, Germany was heavily bombed from England. Bombers flew regularly in large formations above Utrecht.

Early in the night of June 23, 1943, a bomber is shot, burns and eventually falls to pieces in the Wittevrouwen district. Parts of the plane landed in the district, with 44 houses damaged and five deaths among the civilian population and several injured.

The largest part of the bomber came down on the spot on the Kapelstraat 47 and 49 houses, which were completely destroyed and where four people were killed. The fifth victim was the resident of Obrechtstraat 20, who had stepped out of bed into a hole, that had been struck by a piece of the plane in the first floor, and did not survive the fall.

Five members of the flight crew were killed and found on various sites in the neighborhood, including in the Bollenhofsestraat 192, where a crew member hit the roof and died in the home. The killed crew members, three Englishmen and two Canadians, are buried in the cemetery [towid]2262, Soestbergen[/ towid].

The two remaining crew members did not know how to leave the plane with their parachute before the air broke up. They too arrived in the district Wittevrouwen, where they were made prisoner of war; they survived the war. "