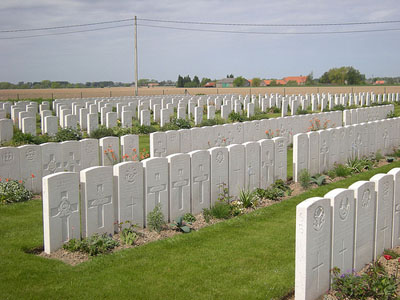 Bandaghem, like Dozinghem and Mendinghem, were the popular names given by the troops to groups of casualty clearing stations posted to this area during the First World War. The cemetery site was chosen in July 1917 for the 62nd and 63rd Casualty Clearing Stations and burials from these and other hospitals (notably the 36th Casualty Clearing Station in 1918) continued until October 1918.

The cemetery contains 772 Commonwealth burials of the First World War. There is a separate plot of 39 German war graves, but four plots (X, XI, XII and XIII) of French graves were removed to other burial grounds after the war. There are also five Second World War burials in the cemetery, three of which are unidentified.