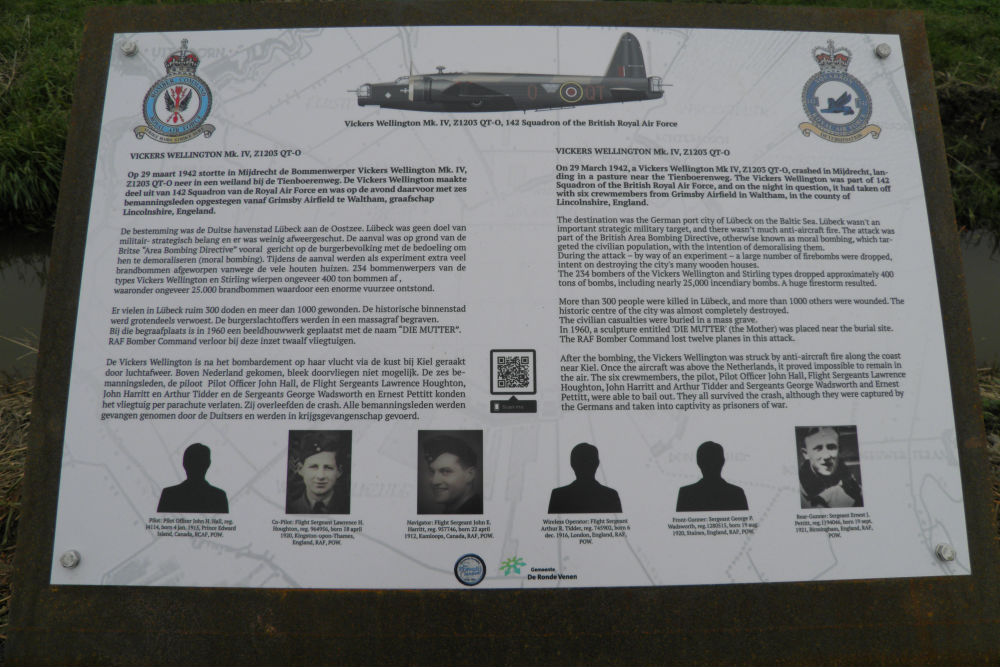 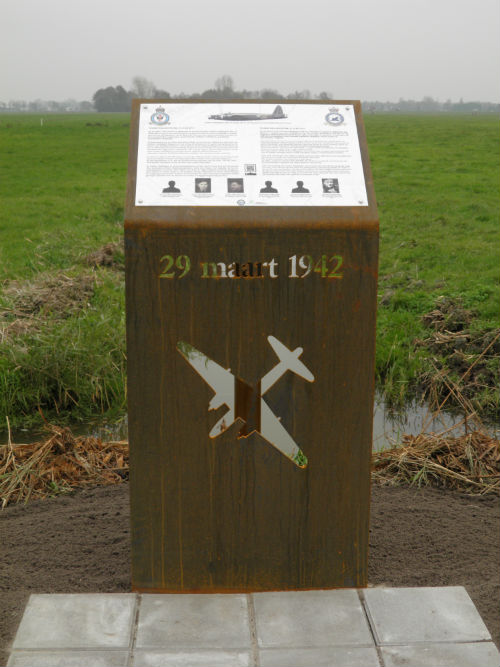 On the RAF base at Grimsby, Lincolnshire,UK, seven Vickers Wellingtons of 142 squadron were made ready by ground personnel for a mission to the German city of Lübeck.

In total, 234 bombers went to Lübeck but 12 planes would not return, including Wellington Z1203 of 142 squadron and using squadron code QT-O, it crashed in a grassland farm field near Mijdrecht.

After the bombers had dropped there bomb loads over Lübeck the flight home began.

The bombers had to watch out for German FLAK ( anti-aircraft guns), searchlights and German night fighter planes who tried to bring down the bombers.

Wellington Z1203 received problems with the fuel lines to the engines. This may have been due to FLAK damage, but this is not confirmed. Wellington Z1203 was flying over the North Sea when the crew realised the couldn't make it back to the UK. The crew decided to turrn back to Holland and leave the plane when they were over land so that would have a better chance of survivng. Course was set to the Dutch coast and above the province North Holland, the crew jumped to safety from the Wellington with there parachutes.

Sgt Pettitt jumped first and came down on the ground at Nieuw Vennep on the Nw. Venneperroad, he was brought to the local police, where he was later picked up the next day by German soldiers.

F/S Tidder and Sgt Wadsworth came down at Kudelstaart and one of these men hid in the St. Jan Roman Catholic Church in Kudelstaart.

Both airmen were handed over to the local police because of the high punishments set by the Germans for helping to hide allied airmen.

F/S Houghton and F/S Harritt came down at de Kwakel and were both captured.

P/O Hall was the last to jump and he came down at the Thamerpolder at Uithoorn. He hide his parachute and walked in the direction of Nes a/d Amstel. At the polder, Bovenkerk, Hall went to a nearby farm. The farmer let him in but didn't know what to do with the Canadian pilot.

Some time later, the local police officer came to the farm to get his milk for the day and saw the airman. The policeman ,farmer and Hall decided it was better for everyone to bring Hall in and surrender to the Germans.

Hall was brought to the local police station where he was picked up by the Germans.

All of the crew members had safely landed on the ground with minor injuries and eventually all were taken Prisioner of War (POW).

Wellington Z1203 flew further without the crew and crashed in a farmfield grass land between the Tienboerenweg and Middenweg near Mijdrecht.

The plane was wrecked in the crash. Local farmers and German soldiers removed the debris from the field.

For F/S Houghton, this was his second crash during the war.

He was also involved in the crash of Wellington T2905 which crashed in England on april 30, 1941, three of the six crew members were killed in this crash.