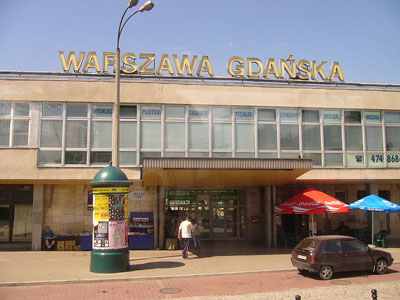 From 1942, a western part of this station has been adapted to become the "Umschlagplatz" (collection point) for Jews from the Jewish ghetto of Warsaw. During the Warsaw Uprising, the station was scene of heavy fighting. Soldiers of the Polish Home Army (Armia Krajowa) launched several attacks between 19 and 22 August 1944, but never succeeded to take the station due to the strong German defense in the area (which included an armoured train). The Germans destroyed the station before leaving the city in 1945.

The station today:
"Gdansk" was rebuild and modernized after the war.